The U.S. Consumer Product Safety Commission’s (CPSC) National Electronic Injury Surveillance System (NEISS) is a national probability sample of hospitals in the United States and its territories (Figure 5.11). Patient information is collected from each NEISS hospital for every emergency department (ED) visit involving an injury associated with consumer products. From this sample, the total number of product-related injuries treated in hospital EDs nationwide can be estimated. 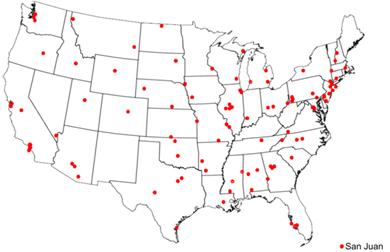 The data-collection process begins when a patient in the ED of an NEISS hospital relates to a clerk, nurse, or physician how the injury occurred. The ED staff enters this information in the patient’s medical record. Each day, a person designated as an NEISS coordinator examines the records for within-scope cases. The NEISS coordinator is someone designated by the hospital who is given access to the ED records. NEISS coordinator duties are sometimes performed by an ED staff member and sometimes by a person under contract to CPSC. CPSC data-collection specialists train NEISS coordinators and conduct ED staff orientation during on-site hospital visits. For all within-scope cases, the NEISS coordinator abstracts information for the specified NEISS variables. The coordinator uses an NEISS coding manual to apply numerical codes to the NEISS variables. For CPSC, the key variable is the one that identifies any consumer product mentioned. The coordinator is trained to be as specific as possible in selecting among the approximately 900 product codes in the NEISS coding manual. Another essential variable is the free-text narrative description from the ED record of the incident scenario. Up to two lines of text are provided for this narrative that often describes what the patient was doing at the time of the accident. The specific NEISS variables are listed as follows:

CDC conducts national surveillance for asthma, a chronic disease that affects the respiratory system among both children and adults. Because of its high prevalence and substantial morbidity, asthma has been the focus of clinical and public health interventions, and surveillance has been helpful in quantifying its prevalence and tracking its trend.

In conducting surveillance, CDC uses multiple sources of data because of asthma’s broad spectrum of severity, which ranges from occasional, self-managed episodes to attacks requiring hospitalization, and rarely, resulting in death. Asthma-related health effects under surveillance and the data systems used to monitor them are as follows:

Data from these systems and from the U.S. Census Bureau are analyzed to produce national and regional estimates of asthma-related effects, including rates (see Figure 5.12 for examples of these estimates).

Two reports summarizing the findings of surveillance for asthma have been published; the first, in 1998(33) and the second in 2002(34). The reports present findings in a series of tables and graphs. Efforts are under way to improve surveillance for asthma by obtaining state-level data on its prevalence, developing methods to estimate the incidence of asthma by using data from EDs, and improving the timeliness of reporting of asthma-related deaths so that they can be investigated to determine how such deaths might have been prevented. 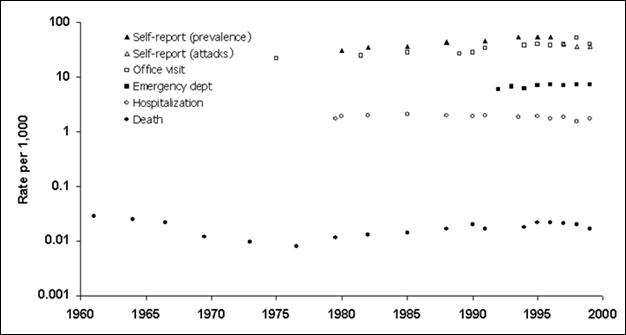 Reporting from states to the Centers for Disease Control and Prevention (CDC) is not limited to notifiable diseases. Surveillance for influenza is one such example. Because influenza can be widespread during the winter but its diagnosis is rarely confirmed by laboratory test, surveillance for influenza has presented challenges that have been met by using a combination of different sources of data.

At the state and local levels, health authorities receive reports of outbreaks of influenza-like illness, laboratory identification of influenza virus from nasopharyngeal swabs, and reports from schools of excess absenteeism (e.g., >10% of a school’s student body). In addition, certain local systems monitor death certificates for pneumonia and influenza, arrange for selected physicians to report the number of patients they examine with influenza-like illness each week, and ask selected businesses and schools to report excessive employee absenteeism. At least one type of surveillance for influenza includes pharmacy reports of the number of prescriptions of antiviral drugs used to treat influenza. Another health department monitors the number of chest radiographs a mobile radiology group performs of nursing home patients; >50% of the total chest radiographs ordered is used as a marker of increased influenza activity.

By using multiple data sources at all levels — local, state, and national — public health officials are able to assess influenza activity reliably throughout the United States without asking every health-care provider to report each individual case.