Morbidity has been defined as any departure, subjective or objective, from a state of physiological or psychological well-being. In practice, morbidity encompasses disease, injury, and disability. In addition, although for this lesson the term refers to the number of persons who are ill, it can also be used to describe the periods of illness that these persons experienced, or the duration of these illnesses.(4)

Measures of morbidity frequency characterize the number of persons in a population who become ill (incidence) or are ill at a given time (prevalence). Commonly used measures are listed in Table 3.3.

Number of new cases of disease or injury during
specified period

Size of population at start of period

Example A: In the study of diabetics, 100 of the 189 diabetic men died during the 13-year follow-up period. Calculate the risk of death for these men.

Properties and uses of incidence proportions

The denominator of an incidence proportion is the number of persons at the start of the observation period. The denominator should be limited to the “population at risk” for developing disease, i.e., persons who have the potential to get the disease and be included in the numerator. For example, if the numerator represents new cases of cancer of the ovaries, the denominator should be restricted to women, because men do not have ovaries. This is easily accomplished because census data by sex are readily available. In fact, ideally the denominator should be restricted to women with ovaries, excluding women who have had their ovaries removed surgically (often done in conjunction with a hysterectomy), but this is not usually practical. This is an example of field epidemiologists doing the best they can with the data they have.

Often, the total number of contacts in the denominator is calculated as the total population in the households of the primary cases, minus the number of primary cases. For a secondary attack rate, 10n usually is 100%.

Consider an outbreak of shigellosis in which 18 persons in 18 different households all became ill. If the population of the community was 1,000, then the overall attack rate was 18 ⁄ 1,000 × 100% = 1.8%. One incubation period later, 17 persons in the same households as these “primary” cases developed shigellosis. If the 18 households included 86 persons, calculate the secondary attack rate.

Incidence rate or person-time rate is a measure of incidence that incorporates time directly into the denominator. A person-time rate is generally calculated from a long-term cohort follow-up study, wherein enrollees are followed over time and the occurrence of new cases of disease is documented. Typically, each person is observed from an established starting time until one of four “end points” is reached: onset of disease, death, migration out of the study (“lost to follow-up”), or the end of the study. Similar to the incidence proportion, the numerator of the incidence rate is the number of new cases identified during the period of observation. However, the denominator differs. The denominator is the sum of the time each person was observed, totaled for all persons. This denominator represents the total time the population was at risk of and being watched for disease. Thus, the incidence rate is the ratio of the number of cases to the total time the population is at risk of disease.

Number of new cases of disease or injury during specified period

Time each person was observed, totaled for all persons

In a long-term follow-up study of morbidity, each study participant may be followed or observed for several years. One person followed for 5 years without developing disease is said to contribute 5 person-years of follow-up.

Properties and uses of incidence rates

Calculate the incidence rate of heart disease among this cohort. Assume that persons with new diagnoses of heart disease and those lost to follow-up were disease-free for half the year, and thus contribute ½ year to the denominator.

Time each person was observed, totaled for all persons

Prevalence, sometimes referred to as prevalence rate, is the proportion of persons in a population who have a particular disease or attribute at a specified point in time or over a specified period of time. Prevalence differs from incidence in that prevalence includes all cases, both new and preexisting, in the population at the specified time, whereas incidence is limited to new cases only.

Period prevalence refers to prevalence measured over an interval of time. It is the proportion of persons with a particular disease or attribute at any time during the interval.

Method for calculating prevalence of disease

All new and pre-existing cases
during a given time period

Method for calculating prevalence of an attribute

Persons having a particular attribute
during a given time period

In a survey of 1,150 women who gave birth in Maine in 2000, a total of 468 reported taking a multivitamin at least 4 times a week during the month before becoming pregnant.(7) Calculate the prevalence of frequent multivitamin use in this group.

Properties and uses of prevalence 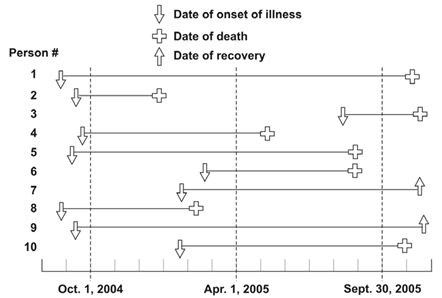 Example A: Calculate the incidence rate from October 1, 2004, to September 30, 2005, using the midpoint population (population alive on April 1, 2005) as the denominator. Express the rate per 100 population.

Incidence rate numerator = number of new cases between October 1 and September 30
= 4 (the other 6 all had onsets before October 1, and are not included)

For each of the fractions shown below, indicate whether it is an incidence proportion, incidence rate, prevalence, or none of the three.