The range of a set of data is the difference between its largest (maximum) value and its smallest (minimum) value. In the statistical world, the range is reported as a single number and is the result of subtracting the maximum from the minimum value. In the epidemiologic community, the range is usually reported as “from (the minimum) to (the maximum),” that is, as two numbers rather than one.

Method for identifying the range

For an epidemiologic or lay audience, you could report that “incubation periods ranged from 15 to 31 days.” Statistically, that range is 16 days.

Method for determining the interquartile range

Figure 2.7 The Middle Half of the Observations in a Frequency Distribution Lie within the Interquartile Range 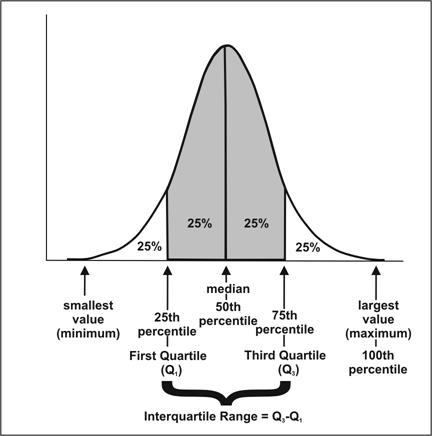 Find the interquartile range for the length of stay data in Table 2.8.

In the data set named SMOKE, what is the interquartile range for the weight of the participants?

Answer:
In Epi Info:
Select Analyze Data.
Select Read (Import). The default data set should be Sample.mdb. Under Views, scroll down to view SMOKE, and double click, or click once and then click OK.
Click on Select. Then type in weight < 770, or select weight from available values, then type < 770, and click on OK.
Select Means. Then click on the down arrow beneath Means of, scroll down and select WEIGHT, then click OK.
Scroll to the bottom of the output to find the first quartile (25% = 130) and the third quartile (75% = 180). So the interquartile range runs from 130 to 180 pounds, for a range of 50 pounds.
Your Turn:

What is the interquartile range of height of study participants? [Answer: 506 to 777]

Properties and uses of the interquartile range

A shortcut to calculating Q1, the median, and Q3 by hand is to look at the tabular output from these software programs and note which values include 25%, 50%, and 75% of the data, respectively. This shortcut method gives slightly different results than those you would calculate by hand, but usually the differences are minor.

Determine the first and third quartiles and interquartile range for the same vaccination data as in the previous exercises.

Method for calculating the standard deviation

To calculate the standard deviation from a data set in Analysis Module:

Click on the Means command under the Statistics folder

In the Means Of drop-down box, select the variable of interest
→ Select Variable

Click OK
→ You should see the list of the frequency by the variable you selected. Scroll down until you see the Standard Deviation (Std Dev) and other data.

Properties and uses of the standard deviation

Figure 2.9 Area Under Normal Curve within 1, 2 and 3 Standard Deviations 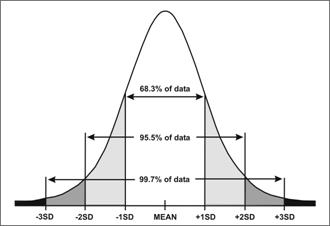 Calculate the standard deviation for the same set of vaccination data.

Standard error of the mean

Method for calculating the standard error of the mean

Properties and uses of the standard error of the mean

EXAMPLE: Finding the Standard Error of the Mean

Find the standard error of the mean for the length-of-stay data in Table 2.10, given that the standard deviation is 9.1888.

Definition of a confidence interval

Often, epidemiologists conduct studies not only to measure characteristics in the subjects studied, but also to make generalizations about the larger population from which these subjects came. This process is called inference. For example, political pollsters use samples of perhaps 1,000 or so people from across the country to make inferences about which presidential candidate is likely to win on Election Day. Usually, the inference includes some consideration about the precision of the measurement. (The results of a political poll may be reported to have a margin of error of, say, plus or minus three points.) In epidemiology, a common way to indicate a measurement’s precision is by providing a confidence interval. A narrow confidence interval indicates high precision; a wide confidence interval indicates low precision.

The confidence interval for a mean is based on the mean itself and some multiple of the standard error of the mean. Recall that the standard error of the mean refers to the variability of means that might be calculated from repeated samples from the same population. Fortunately, regardless of how the data are distributed, means (particularly from large samples) tend to be normally distributed. (This is from an argument known as the Central Limit Theorem). So we can use Figure 2.9 to show that the range from the mean minus one standard deviation to the mean plus one standard deviation includes 68.3% of the area under the curve.

Consider a population-based sample survey in which the mean total cholesterol level of adult females was 206, with a standard error of the mean of 3. If this survey were repeated many times, 68.3% of the means would be expected to fall between the mean minus 1 standard error and the mean plus 1 standard error, i.e., between 203 and 209. One might say that the investigators are 68.3% confident those limits contain the actual mean of the population.

Method for calculating a 95% confidence interval for a mean

EXAMPLE: Calculating a 95% Confidence Interval for a Mean

Find the 95% confidence interval for a mean total cholesterol level of 206, standard error of the mean of 3.

Properties and uses of confidence intervals

Imagine you are going to Las Vegas to bet on the true mean total cholesterol level among adult women in the United States.

Description: An Interquartile Range is depicted along a horizontal axis. The minimum is on the left followed by Q1, the median, Q3 and the maximum on the far right. Return to text.