Although epidemiology as a discipline has blossomed since World War II, epidemiologic thinking has been traced from Hippocrates through John Graunt, William Farr, John Snow, and others. The contributions of some of these early and more recent thinkers are described below.(5)

Hippocrates attempted to explain disease occurrence from a rational rather than a supernatural viewpoint. In his essay entitled “On Airs, Waters, and Places,” Hippocrates suggested that environmental and host factors such as behaviors might influence the development of disease.

Another early contributor to epidemiology was John Graunt, a London haberdasher and councilman who published a landmark analysis of mortality data in 1662. This publication was the first to quantify patterns of birth, death, and disease occurrence, noting disparities between males and females, high infant mortality, urban/rural differences, and seasonal variations.(5)

William Farr built upon Graunt’s work by systematically collecting and analyzing Britain’s mortality statistics. Farr, considered the father of modern vital statistics and surveillance, developed many of the basic practices used today in vital statistics and disease classification. He concentrated his efforts on collecting vital statistics, assembling and evaluating those data, and reporting to responsible health authorities and the general public.(4)

In the mid-1800s, an anesthesiologist named John Snow was conducting a series of investigations in London that warrant his being considered the “father of field epidemiology.” Twenty years before the development of the microscope, Snow conducted studies of cholera outbreaks both to discover the cause of disease and to prevent its recurrence. Because his work illustrates the classic sequence from descriptive epidemiology to hypothesis generation to hypothesis testing (analytic epidemiology) to application, two of his investigations will be described in detail.

Snow conducted one of his now famous studies in 1854 when an epidemic of cholera erupted in the Golden Square of London.(5) He began his investigation by determining where in this area persons with cholera lived and worked. He marked each residence on a map of the area, as shown in Figure 1.1. Today, this type of map, showing the geographic distribution of cases, is called a spot map. 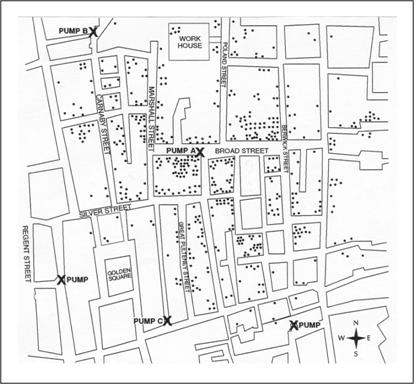 Because Snow believed that water was a source of infection for cholera, he marked the location of water pumps on his spot map, then looked for a relationship between the distribution of households with cases of cholera and the location of pumps. He noticed that more case households clustered around Pump A, the Broad Street pump, than around Pump B or C. When he questioned residents who lived in the Golden Square area, he was told that they avoided Pump B because it was grossly contaminated, and that Pump C was located too inconveniently for most of them. From this information, Snow concluded that the Broad Street pump (Pump A) was the primary source of water and the most likely source of infection for most persons with cholera in the Golden Square area. He noted with curiosity, however, that no cases of cholera had occurred in a two-block area just to the east of the Broad Street pump. Upon investigating, Snow found a brewery located there with a deep well on the premises. Brewery workers got their water from this well, and also received a daily portion of malt liquor. Access to these uncontaminated rations could explain why none of the brewery’s employees contracted cholera.

To confirm that the Broad Street pump was the source of the epidemic, Snow gathered information on where persons with cholera had obtained their water. Consumption of water from the Broad Street pump was the one common factor among the cholera patients. After Snow presented his findings to municipal officials, the handle of the pump was removed and the outbreak ended. The site of the pump is now marked by a plaque mounted on the wall outside of the appropriately named John Snow Pub. 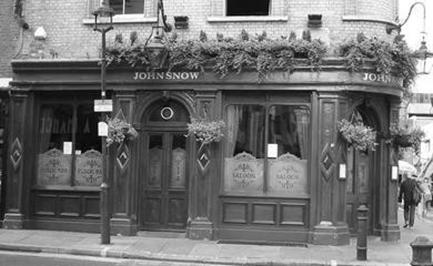 Snow’s second investigation reexamined data from the 1854 cholera outbreak in London. During a cholera epidemic a few years earlier, Snow had noted that districts with the highest death rates were serviced by two water companies: the Lambeth Company and the Southwark and Vauxhall Company. At that time, both companies obtained water from the Thames River at intake points that were downstream from London and thus susceptible to contamination from London sewage, which was discharged directly into the Thames. To avoid contamination by London sewage, in 1852 the Lambeth Company moved its intake water works to a site on the Thames well upstream from London. Over a 7-week period during the summer of 1854, Snow compared cholera mortality among districts that received water from one or the other or both water companies. The results are shown in Table 1.1.

Table 1.1 Mortality from Cholera in the Districts of London Supplied by the Southwark and Vauxhall and the Lambeth Companies, July 9–August 26, 1854

The data in Table 1.1 show that the cholera death rate was more than 5 times higher in districts served only by the Southwark and Vauxhall Company (intake downstream from London) than in those served only by the Lambeth Company (intake upstream from London). Interestingly, the mortality rate in districts supplied by both companies fell between the rates for districts served exclusively by either company. These data were consistent with the hypothesis that water obtained from the Thames below London was a source of cholera. Alternatively, the populations supplied by the two companies may have differed on other factors that affected their risk of cholera.

Table 1.2 Mortality from Cholera in London Related to the Water Supply of Individual Houses in Districts Served by Both the Southwark and Vauxhall Company and the Lambeth Company, July 9–August 26, 1854

This study, demonstrating a higher death rate from cholera among households served by the Southwark and Vauxhall Company in the mixed districts, added support to Snow’s hypothesis. It also established the sequence of steps used by current-day epidemiologists to investigate outbreaks of disease. Based on a characterization of the cases and population at risk by time, place, and person, Snow developed a testable hypothesis. He then tested his hypothesis with a more rigorously designed study, ensuring that the groups to be compared were comparable. After this study, efforts to control the epidemic were directed at changing the location of the water intake of the Southwark and Vauxhall Company to avoid sources of contamination. Thus, with no knowledge of the existence of microorganisms, Snow demonstrated through epidemiologic studies that water could serve as a vehicle for transmitting cholera and that epidemiologic information could be used to direct prompt and appropriate public health action.

In the mid- and late-1800s, epidemiological methods began to be applied in the investigation of disease occurrence. At that time, most investigators focused on acute infectious diseases. In the 1930s and 1940s, epidemiologists extended their methods to noninfectious diseases. The period since World War II has seen an explosion in the development of research methods and the theoretical underpinnings of epidemiology. Epidemiology has been applied to the entire range of health-related outcomes, behaviors, and even knowledge and attitudes. The studies by Doll and Hill linking lung cancer to smoking (6) and the study of cardiovascular disease among residents of Framingham, Massachusetts (7) are two examples of how pioneering researchers have applied epidemiologic methods to chronic disease since World War II. During the 1960s and early 1970s health workers applied epidemiologic methods to eradicate naturally occurring smallpox worldwide.(8) This was an achievement in applied epidemiology of unprecedented proportions.

In the 1980s, epidemiology was extended to the studies of injuries and violence. In the 1990s, the related fields of molecular and genetic epidemiology (expansion of epidemiology to look at specific pathways, molecules and genes that influence risk of developing disease) took root. Meanwhile, infectious diseases continued to challenge epidemiologists as new infectious agents emerged (Ebola virus, Human Immunodeficiency virus (HIV)/ Acquired Immunodeficiency Syndrome (AIDS)), were identified (Legionella, Severe Acute Respiratory Syndrome (SARS)), or changed (drug-resistant Mycobacterium tuberculosis, Avian influenza). Beginning in the 1990s and accelerating after the terrorist attacks of September 11, 2001, epidemiologists have had to consider not only natural transmission of infectious organisms but also deliberate spread through biologic warfare and bioterrorism.

Today, public health workers throughout the world accept and use epidemiology regularly to characterize the health of their communities and to solve day-to-day problems, large and small.

Description: Photo of the John Snow Pub. Return to text.