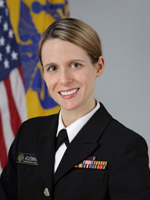 Division of Health Informatics and Surveillance

Jennifer Adjemian, PhD (CDR, USPHS), is a senior-level epidemiologist with professional experience across three federal agencies leading advanced epidemiologic research, managing public health programs, and overseeing infectious disease surveillance and outbreak responses. She is chief of the Surveillance and Data Branch (SDB) in the Division of Health Informatics and Surveillance (DHIS), where she oversees activities for the National Notifiable Diseases Surveillance System and the National Syndromic Surveillance Program. In this role, she manages SDB efforts aimed at modernizing and maximizing the quality, timeliness, and analytic use of national disease surveillance data for the rapid dissemination of critical public health information across federal, state, and local levels.

CDR Adjemian completed her PhD in epidemiology with a focus on zoonotic and vector-borne diseases from the University of California, Davis, in 2007 and was immediately commissioned into the US Public Health Service (USPHS) through the CDC Epidemic Intelligence Service (EIS) program. In EIS, CDR Adjemian was assigned to the Rickettsial Zoonoses Branch where she led numerous public health emergency responses and outbreak investigations globally.

From 2015–2018, CDR Adjemian served as the deputy chief of the Epidemiology Unit in NIAID, NIH. In this role, she managed a large and diverse epidemiologic research agenda aimed at identifying novel risk factors for rare infectious diseases. Her work included groundbreaking research on the epidemiology of nontuberculous mycobacterial lung disease and numerous studies on high-priority pathogens, including Ebola and Lassa viruses, tick-borne diseases, and antimicrobial resistance.

In 2019, CDR Adjemian returned to CDC in her current role as chief of the Surveillance and Data Branch in DHIS.

CDR Adjemian has been a highly involved officer since commissioning into the USPHS in 2007. She held numerous leadership roles throughout her tenure and has been especially active on the Scientist Professional Advisory Committee (SciPAC), where she served as a voting member since 2012 and led as an executive board member and subcommittee chair for 7 years, including as the SciPAC Chair.

CDR Adjemian also has been an active member of the USPHS Applied Public Health Team (APHT)-1 since 2011 and was selected in 2018 to lead as the APHT-1 Team Commander for a 3-year term. She has responded to numerous public health emergencies, including with CDC for outbreaks of e-cigarette, or vaping, product use–associated lung injury (EVALI), Marburg hemorrhagic fever in Uganda, murine typhus in Texas, unknown neurological illnesses in Indiana, Rocky Mountain spotted fever in Arizona, and Zika virus in Puerto Rico; with BOP for community-acquired pneumonia and tuberculosis outbreaks; and with NIH for the management of Ebola virus-infected patients and outbreaks of nontuberculous mycobacteria among cystic fibrosis patient facilities.

CDR Adjemian is extremely passionate about mentorship and serves as an involved mentor to many Corps officers and civilian federal employees. While serving as PAC Chair, she prioritized the development of several important initiatives aimed at improving mentoring opportunities for junior officers up for promotion and for those in need of agency-specific mentorship.

CDR Adjemian has received numerous USPHS, agency, and community-level awards for her contributions to the Corps and public health, including three NIH Director’s awards, the USPHS Meritorious Service Medal, USPHS Outstanding Service Medal, VADM Richard H. Carmona Inspiration Award, and both the Junior and Senior Scientist of the Year awards.