Skip directly to site content Skip directly to search
Coronavirus Self-Checker
Important update: Healthcare facilities
CDC has updated select ways to operate healthcare systems effectively in response to COVID-19 vaccination. Learn more
Find the latest information:
Aquatics FAQs
Recommendations for Fully Vaccinated People
COVID-19 Homepage
UPDATE
Given new evidence on the B.1.617.2 (Delta) variant, CDC has updated the guidance for fully vaccinated people. CDC recommends universal indoor masking for all teachers, staff, students, and visitors to K-12 schools, regardless of vaccination status. Children should return to full-time in-person learning in the fall with layered prevention strategies in place.
UPDATE
The White House announced that vaccines will be required for international travelers coming into the United States, with an effective date of November 8, 2021. For purposes of entry into the United States, vaccines accepted will include FDA approved or authorized and WHO Emergency Use Listing vaccines. More information is available here.
UPDATE
Travel requirements to enter the United States are changing, starting November 8, 2021. More information is available here.

The Unequal Toll of the COVID-19 Pandemic

The COVID-19 pandemic continues to deepen health disparities in our country. Long-standing inequalities have increased the risk for severe COVID-19 illnesses and death for many people. This both causes and continues disparities between racial and ethnic minority groups and non-Hispanic white people. Unequal health risks are the result of different conditions where people live, work, learn, play, and age—what we call social determinants of health.

By improving race and ethnicity data collection and reporting, we continue to increase our understanding of health disparities related to COVID-19. This knowledge helps us create more equitable public health policies and prevention strategies. Using multiple sources, CDC data show that the risks for COVID-19 illness, hospitalization, and death differ by race and ethnicity.

Among people under the age of 25, a study released this week found that COVID-19 case incidence disparities were higher among most racial and ethnic minority groups, particularly earlier in 2020. To track disparities, CDC provides race and ethnicity data for cases and deaths, and vaccinations. New dashboards on COVID Data Tracker display changes in the impact of the pandemic over time by race and ethnicity.

Social determinants of health contribute to racial and ethnic minority groups being disproportionately affected by COVID-19. Discrimination, which includes racism and associated chronic stress, influences each of these social determinants as well. We all have a role to play and must work together to ensure that people have resources to maintain and manage their physical and mental health, including easy access to information, affordable testing, vaccinations, and medical care.

* New cases reported here may differ slightly from those on the COVID Data Tracker as new methods are being used to account for historical corrections.

CDC is closely tracking variants of SARS-CoV-2, the virus that causes COVID-19. Three variants of concern have been detected in the United States: B.1.1.7, B.1.351, and P.1. A total of 3,701 B.1.1.7 variant cases have been reported in 50 jurisdictions. One hundred eight cases attributed to B.1.351 in 23 jurisdictions and 17 cases attributed to P.1 in 10 jurisdictions have also been detected in the United States. CDC and partners are increasing the numbers of specimens sequenced in laboratories around the country. The number of variants reported will likely increase as more specimens are sequenced and if the frequency of variants increases. Studies are underway to determine whether variants are more transmissible, cause more severe illness, or are likely to evade immunity brought on by prior illness or vaccination. 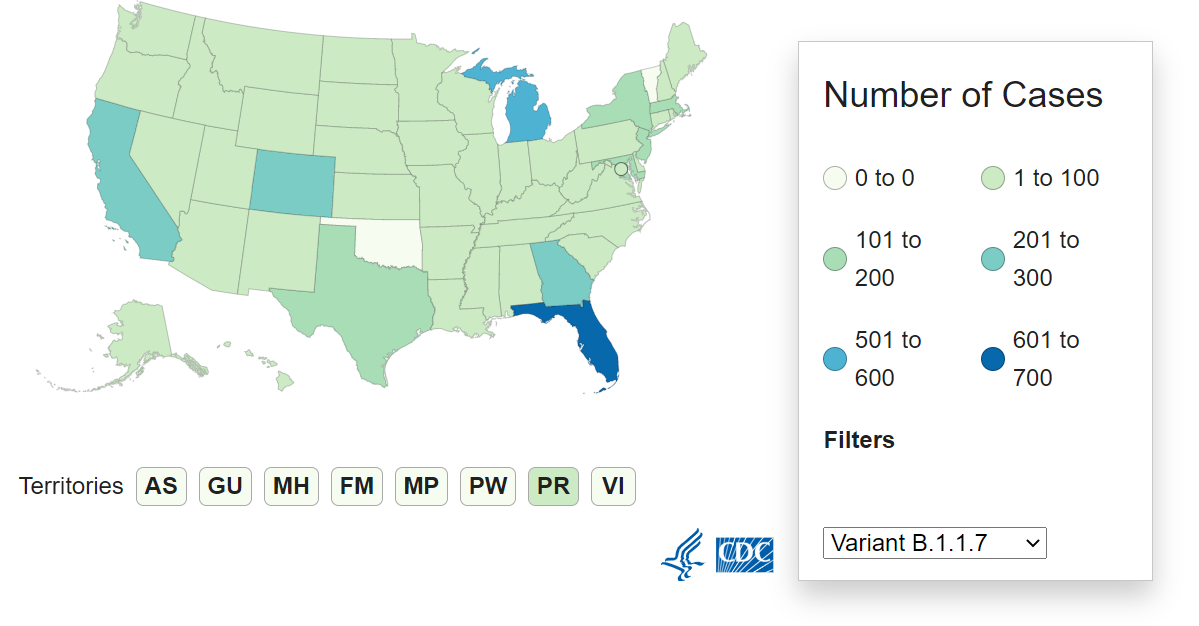 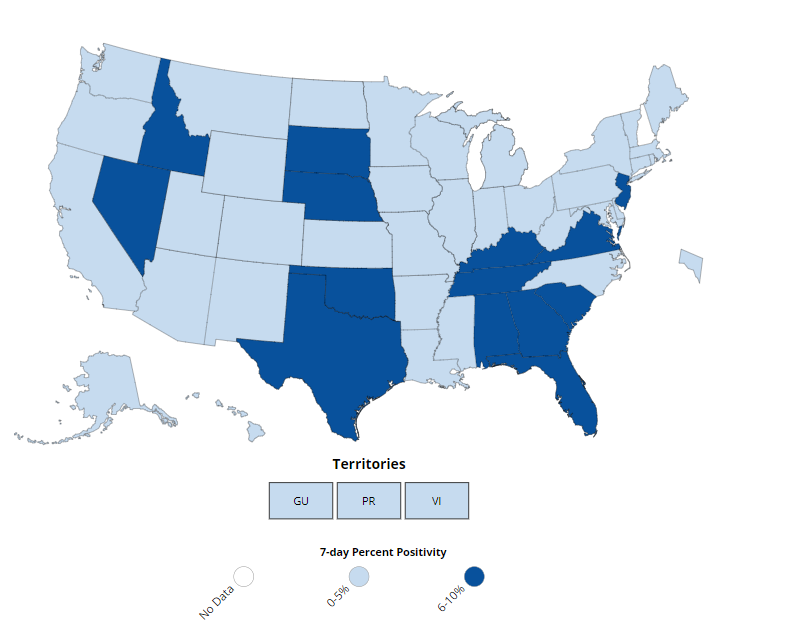 *People who are fully vaccinated (formerly “receiving 2 doses”) represents the number of people who have received the second dose in a two-dose COVID-19 vaccine series or one dose of the single-shot J&J/Janssen COVID-19 vaccine.

Hospital admissions of patients with confirmed COVID-19 decreased 70.4% from the national 7-day average peak of 16,540 admissions on January 9, 2021, to 4,889 admissions over the week ending March 9, 2021. The average number of daily admissions fell by 11%, compared to the previous week. 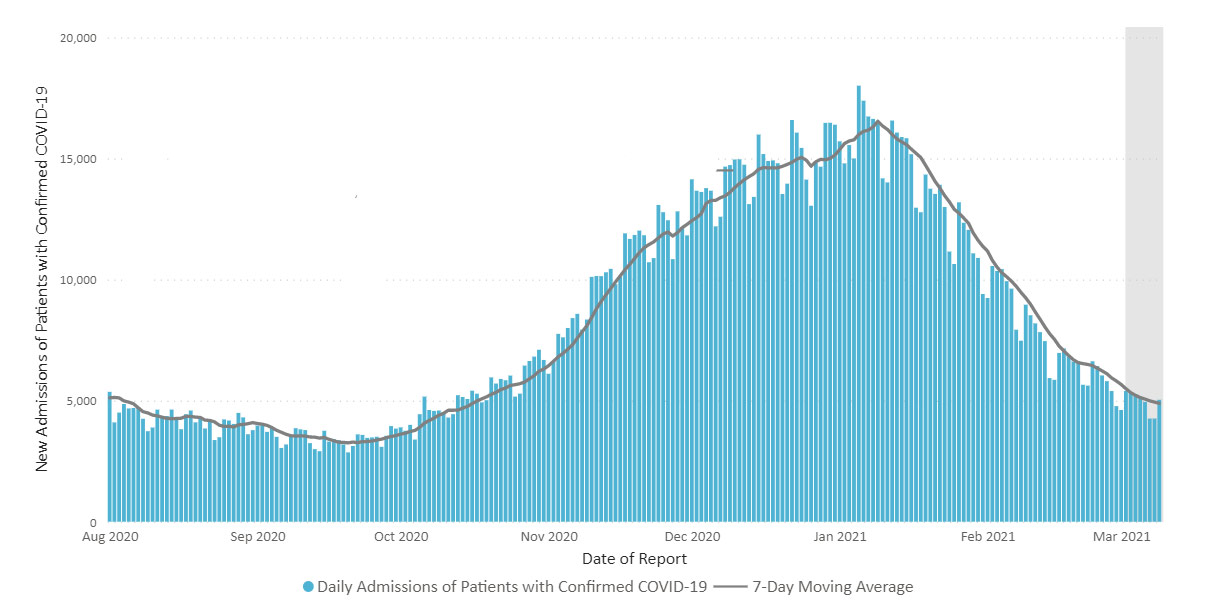 The most recent data in the vertical gray bar are provisional and should be interpreted with caution.

* New deaths reported here may differ slightly from those on the COVID Data Tracker as new methods are being used to account for historical corrections.