The data in this data brief were the most recent data available at the time of publication. More recent data may be available in the U.S. Cancer Statistics Data Visualizations tool, which is updated annually.

The American Indian and Alaska Native (AI/AN) population has higher rates of liver cancer incidence than non-Hispanic white people in all regions. Efforts to reduce liver cancer rates include vaccinating against hepatitis B, testing for and treating hepatitis C, reducing excessive alcohol use, and promoting healthy eating and physical activity.

Purchased/Referred Care Delivery Areas (PRCDA) are counties that contain federally recognized tribal lands or are adjacent to tribal lands. Race classification for the AI/AN population is more accurate in these counties.

Rates by Sex and Region

aRates are per 100,000 males or females, respectively, and age-adjusted to the 2000 US standard population.

bThe age-adjusted rates in the AI/AN population are significantly different than those in the non-Hispanic white (NHW) population living in PRCDA counties.

aRates are per 100,000 males or females, respectively, and age-adjusted to the 2000 US standard population.

bThe age-adjusted rates in the AI/AN population are significantly different than those in the non-Hispanic white (NHW) population living in PRCDA counties. 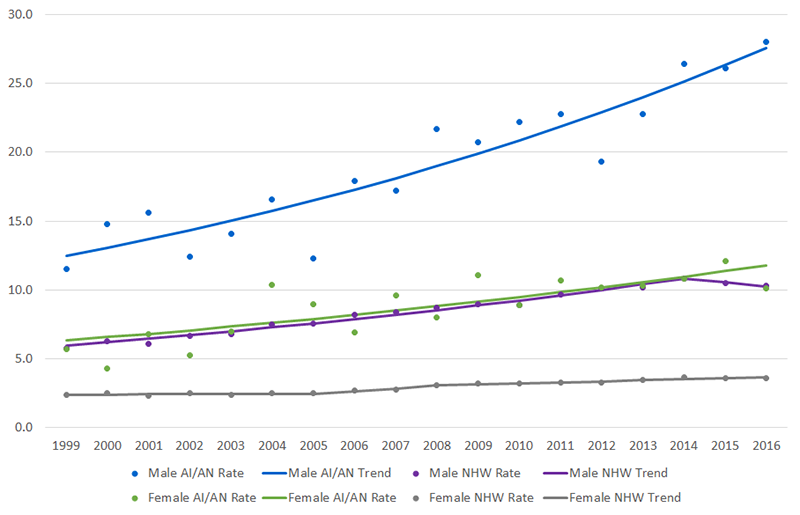 This database includes data from cancer registries participating in CDC’s National Program of Cancer Registries and the National Cancer Institute’s Surveillance, Epidemiology, and End Results program that have been linked with the Indian Health Service patient registration database. The USCS AIAD and PRCDA counties have been described previously.1

These linkages address racial misclassification of the AI/AN population in the central cancer registries. These data met quality criteria for 2012–2016.