Antibiotic Use in Outpatient Settings, 2017

Antibiotic Use By Healthcare Setting

What Do We Know About Antibiotic Use in Outpatient Settings? 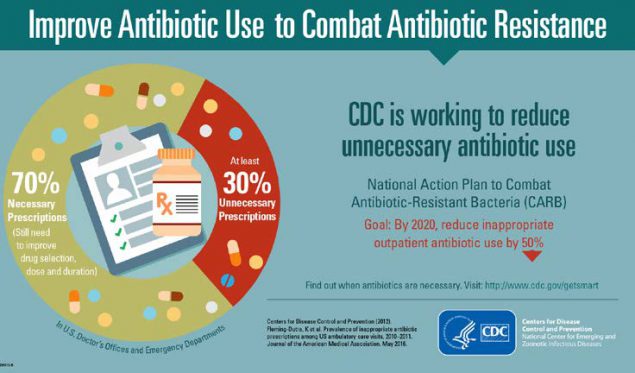 On This Page
Percent of Antibiotic Prescriptions That Were Unnecessary 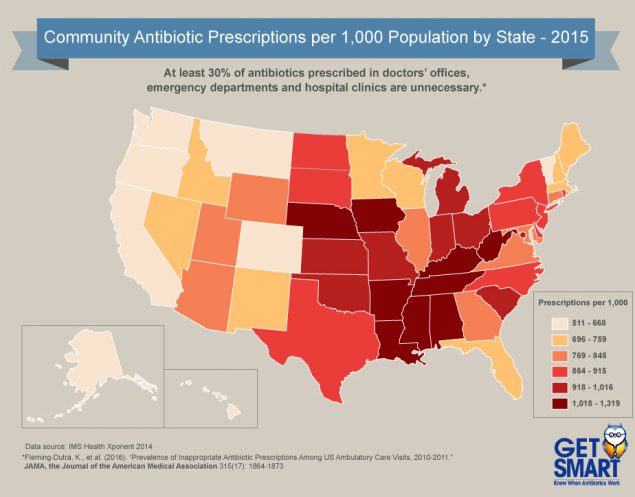 Each year, there are 47 million unnecessary antibiotic prescriptions written in U.S. doctors’ offices and emergency departments.7 Most of these unnecessary prescriptions are for respiratory conditions most commonly caused by viruses (including common colds, viral sore throats, and bronchitis) which do not respond to antibiotics, or for bacterial infections that do not always need antibiotics (like many sinus and ear infections). CDC estimated that at least 50 percent of antibiotic prescriptions for these acute respiratory conditions are unnecessary.8–10 These excess prescriptions each year put patients at needless risk for reactions to drugs or other problems, including C. difficile infections. In 2011 alone, one-third of the nearly 500,000 C. difficile infections in the United States were community-associated, or happening in patients who had no recent overnight stay in a healthcare facility.1–4

Prescribing the correct antibiotic is another area that requires attention. A CDC and Pew Charitable Trusts study found among outpatient visits in 2010– 2011, when an antibiotic was needed, patients were often prescribed an antibiotic not recommended by current clinical guidelines. For example, for sinus and middle ear infections and sore throats, recommended first-line antibiotics were only used half (52 percent) of the time.11 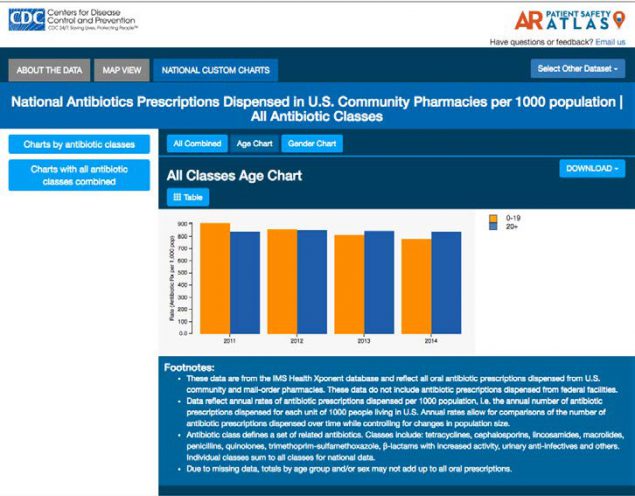 Avoidance of antibiotic treatment in adults with acute bronchitis (average), by Census division, 2008–2012 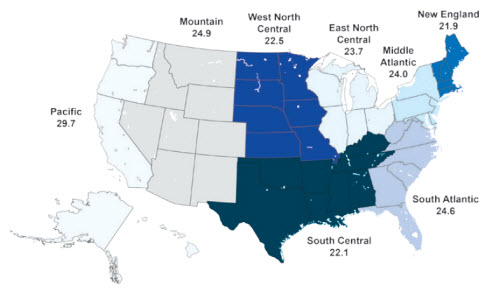 Over the years there has been little progress made in prescribing for adults, indicating a clear need to better support healthcare providers who prescribe for adults. Family practice physicians prescribe the most antibiotics, but nurse practitioners, physician assistants, internal medicine physicians, pediatricians, and dentists also prescribe antibiotics, making these providers important audiences to reach. Because antibiotics are prescribed more frequently in the Southern and Appalachian regions, there is a need to target antibiotic stewardship efforts to providers and patients in these areas. 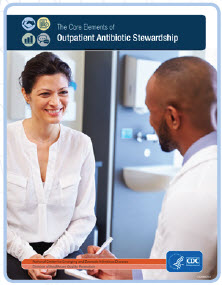 Improving antibiotic prescribing involves implementing effective strategies that follow evidence-based recommendations for diagnosis and management. In 2016, CDC released The Core Elements of Outpatient Antibiotic Stewardship, which were published in the Morbidity and Mortality Weekly Report (MMWR) Recommendations and Reports. The Core Elements provides a framework for antibiotic stewardship for outpatient providers and facilities that routinely provide antibiotic treatment. This report augments existing guidance for other clinical settings and is intended for any outpatient provider, clinic or health system interested in improving antibiotic prescribing and use.

Demonstrate dedication to and accountability for optimizing antibiotic prescribing and patient safety.

Implement at least one policy or practice to improve antibiotic prescribing, assess whether it is working, and modify as needed.

Emergency departments (EDs) and emergency medicine providers: EDs and emergency medicine providers are  positioned between acute care hospitals and the community and encounter unique challenges, including lack of continuity of care and higher concentration of patients who might need urgent or even immediate care, as well as unique opportunities for stewardship interventions, such as greater provider access to diagnostic resources and the expertise of pharmacists and consultants.

Nurse practitioners and physician assistants: These providers work in every medical specialty and subspecialty involved in antibiotic prescribing and should be included in antibiotic stewardship efforts.

CDC collaborates with partners to implement appropriate antibiotic use efforts at a local level. CDC funds and supports many state and local health departments and other partners across the country to implement targeted antibiotic stewardship improvements in outpatient settings.

In 2015, the Illinois Department of Public Health (IDPH) developed the Precious Drugs and Scary Bugsexternal icon program to improve the appropriate use of antibiotics, particularly for acute respiratory infections, in primary care, urgent care, and community health centers. IDPH asked healthcare providers to:

In 2016, the New York State Department of Health (NYSDOH) offered a “Get Smart Guarantee” poster pdf icon[PDF – 1 page]external icon for healthcare providers to pledge to only prescribe antibiotics when they are needed. The “Guarantee” poster could be personalized with the provider’s photo and signature. Some providers indicate patients expect antibiotics even if the illness is viral (where antibiotics would not be effective) so NYSDOH developed a “Get Smart Guarantee” palm card pdf icon[PDF – 1 page]external icon. This takeaway serves in lieu of a prescription for antibiotics so patients understand their concerns have been heard and validated. The poster and palm card are offered in English and Spanish.

The Utah Health Department shared data publicly on the Open Data Catalogexternal icon website to show which clinics in the state had the best and worst performance on the HEDIS® measure: Avoidance of antibiotic treatment in adults with acute bronchitis (which usually does not require antibiotics). Utah used its All Payer Claims Database, which combines eligibility, medical claims, pharmacy claims, and provider files each month, to compile 2013-2014 data.

Top of Page
Healthcare Providers, Patients, and Families Play a Critical Role in Supporting Optimal Antibiotic Use and Preventing Infections in Outpatient Settings. 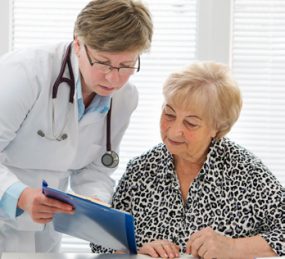 What can healthcare providers do to support appropriate antibiotic use and prevent infections in outpatient settings?

What can patients and families do to support appropriate antibiotic use and prevent infections in outpatient settings?