Surveillance for Outbreaks of Enteric Disease Associated with Animal Contact: Summary for 2017 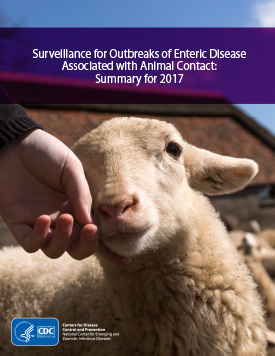 Each year, enteric diseases linked to animals or their environments are estimated to cause 450,000 illnesses, 5,000 hospitalizations, and 76 deaths in the United States.1 These illnesses are attributed to contact with an animal’s feces or bodily fluids, which can be present on the animal, in its environment, or in its food or water. Outbreak data can provide insight into human illnesses caused by pathogens transmitted through animal contact and can inform efforts to prevent disease. The findings in this report exemplify the One Health concept by highlighting how the health of people is interconnected with animals and the environment.

An animal contact outbreak is defined as the occurrence of two or more cases of a similar illness resulting from contact with an animal; its feces, bodily fluids (excluding raw milk or other fluids consumed as food), fur, hair, feathers, scales, or skin; its food; or through contact with the animal’s environment. CDC conducts surveillance for enteric disease outbreaks associated with animal contact in the United States through the Animal Contact Outbreak Surveillance System (ACOSS). Public health agencies in all 50 states, Washington, D.C., and U.S. territories submit outbreak reports to CDC using a web-based platform, the National Outbreak Reporting System (NORS).

Agencies use a standard form pdf icon[PDF – 7 pages] to report these outbreaks. Data requested for each outbreak include, but are not limited to, the dates of first and last illness onset; number of illnesses, hospitalizations, and deaths; etiology; implicated animal type(s); and setting(s) of exposure. Patients who were hospitalized or died as a result of becoming ill during an outbreak were attributed to that outbreak. This summary includes single state and multistate animal contact outbreaks reported through NORS by January 4, 2019, in which the first illness began in 2017.

During 2017, 59 animal contact outbreaks were reported, resulting in 1,518 illnesses, 312 hospitalizations, and 3 deaths. Forty-six were single-state outbreaks; these were reported from 18 states. Thirteen were multistate outbreaks; exposures occurred in 49 states and Washington, D.C. The median reporting rate among states was 1.1 outbreak per million population; rates ranged from 0.2 in Florida to 6.3 in Nebraska (Figure). 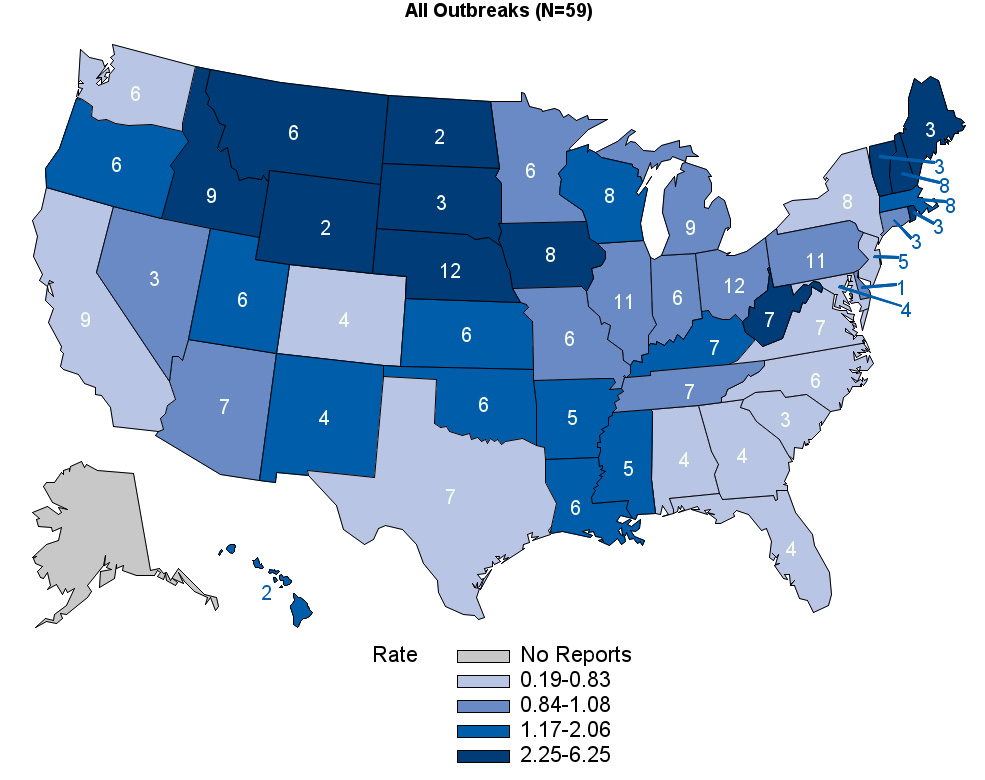 Bacteria and parasites were the only types of etiologies reported. A single etiologic agent was confirmed in 51 outbreaks (86%) (Table 1).  Cryptosporidium was the most common cause of confirmed, single-etiology outbreaks, accounting for 21 outbreaks (41%), followed by Salmonella with 18 (35%). Salmonella, however, caused 84% of illnesses (1,237 illnesses) among confirmed, single-etiology outbreaks, whereas Cryptosporidium caused 11% (158). Overall, bacteria caused the most outbreaks (30; 59%), illnesses (1,320; 89%), hospitalizations (304; 98%), and all 3 deaths.

Among the 1,478 illnesses in confirmed, single-etiology outbreaks, 310 resulted in hospitalization and 3 in death. Two hundred eighty-six (92%) hospitalizations were among persons with Salmonella infection; Shiga toxin-producing E. coli (STEC) (18, 6%) and Cryptosporidium (6, 2%) accounted for the remainder. Outbreaks caused by STEC resulted in the highest proportion of ill persons hospitalized (26%). Two of the 3 deaths were associated with Salmonella infection and 1 was associated with STEC infection.

An animal source was implicated in 50 (85%) of 59 outbreaks (Table 2a). Livestock was the most commonly implicated category, with 25 outbreaks (57%); among these, 19 (76%) outbreak investigations implicated cattle as the confirmed or suspected source. Outbreaks with poultry as the source accounted for the highest number of illnesses (1,149 illnesses, 84%); outbreaks due to baby chicks or ducklings accounted for the most illnesses among poultry outbreaks (99%) and single animal type outbreaks (83%). A single animal type was identified in 44 (88%) outbreaks. Multiple animal types were implicated as confirmed or suspected sources in 6 outbreaks, resulting in 104 illnesses. Each of these outbreaks involved animals in the livestock category: goats and calves; a bull and horse; goats, sheep, and alpacas; goats, sheep, and cattle; pig, goats, and sheep; cattle and goats.

Among all outbreaks, private homes (25 outbreaks, 42%), farms and dairies (17, 29%), and agricultural feed stores (10, 17%) were the most frequently reported exposure locations. A single location of exposure was reported in 37 outbreaks (63%); 20 (54%) were linked to a public venue, such as a farm/dairy or a petting zoo (Table 3). Farms and dairies were the most commonly reported public venue among single-location outbreaks (11 outbreaks, 55%), followed by festivals and fairs (6 outbreaks, 30%). Private homes were associated with the highest number of illnesses (124 illnesses, 37%).

Multiple locations of exposure were reported in 22 outbreaks (37%), accounting for 78% (1,182) of all outbreak-associated illnesses. Among these, private homes were the most commonly reported setting (15 outbreaks, 68%), followed by agricultural feed stores (10, 45%). Private homes and agricultural feed stores were both reported as venues in 10 outbreaks. Other locations reported in outbreaks with multiple settings of exposure were public venues (farm or dairy, festival or fair, petting zoo, live animal market, zoo or animal exhibit), animal care settings (animal shelter, veterinary clinic), and institutional settings (school, day care).

Multistate Outbreaks with Date of First Illness in 2017

* All multistate outbreak investigations that began or concluded in 2017, including those with a date first ill before 2017.
† Implicated animals in multistate outbreaks are further classified as confirmed or suspected based on epidemiologic, traceback, and laboratory evidence. An animal is considered the confirmed source if two types of evidence are obtained; an animal is considered the suspected source if only one type of evidence is available.

The findings in this summary are subject to at least three limitations. First, ACOSS is a dynamic surveillance system, so public health agencies can add, modify, or remove their outbreak reports as additional information becomes available. Thus, data reported in future analyses may differ from data reported here. Second, reporting enteric disease outbreaks associated with animal contact to CDC is voluntary, and agencies may be limited in their ability to investigate and report these outbreaks. Third, because there is no guide for confirming the etiology of animal contact outbreaks as there is for foodborne outbreaks, there may be variation across reporting agencies in the criteria used to confirm the etiology for animal contact outbreaks.2 Finally, the degree to which outbreak data reported to CDC reflect the true burden of enteric diseases associated with animal contact is not known.

The findings in this report can be considered in conjunction with other public health data to detect emerging trends and inform interventions to prevent further animal contact outbreaks. The 59 enteric disease outbreaks that were linked to animals or their living environments in 2017 indicate the need to better understand enteric diseases using a One Health approach. Successful public health interventions rely on integrating human, animal and environmental health efforts to achieve optimal health outcomes. Outbreaks can be prevented by using data-driven interventions, such as proper handwashing after contact with animals or their environments, regardless of the setting or the type of animal.3