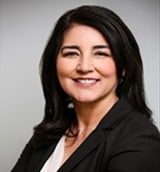 Dori Salcido is the Senior Counselor for Strategic Communication with the Office of the Director. In this role, Salcido provides support to the CDC Director for strategic communications planning and advises on major CDC campaigns and initiatives.

Salcido has served as a strategist and project manager for clients in the federal and private sector demonstrating success leading comprehensive and cross departmental public affairs and media relations efforts in the executive branch and federal government agencies, the private and public sector, non-profits, academia, and start-up companies.

From 2009 to 2014, Salcido worked at HHS, serving as Assistant Secretary for Public Affairs (ASPA). She was responsible for strategic communications planning on major initiatives for the nearly 80,000 employee federal agency. During her HHS tenure, she also served as the Deputy ASPA as well as communications director for the Assistant Secretary for Health and the US Surgeon General.

Prior to Salcido’s federal career, she worked for nearly a decade in the private sector. As senior communications director for AOL, she led the company’s public relations efforts in several areas, including crisis communications, online safety and privacy issues, and key product launches. She also executed media strategies and marketing campaigns to support AOL’s international expansion efforts in Europe, Asia-Pacific, South America and Latin America.

Salcido earned her Bachelor of Arts degree in political science and speech communications from the University of New Mexico, Albuquerque.