Center for Preparedness and Response (CPR) 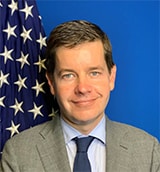 Kevin Cain, MD, is Acting Director of the Center for Preparedness and Response (CPR). In this role, he supports CPR’s three divisions and the Office of the Director to prepare for, respond to, and improve performance in domestic and global public health emergencies. CPR enhances CDC and state and local health department preparedness and response capacity, ensures lifesaving research with select agents and toxins (including poliovirus) is conducted safely and securely, and develops scientific principles, tools, and the next generation of public health preparedness professionals and leaders.

In his permanent position at CDC, Dr. Cain is the Principal Deputy Director for the Center for Global Health (CGH). CDC, through CGH, executes its global health vision and mission by focusing on three key goal areas: achieving measurable global health impact; assuring global health security; and providing world-renowned public health science leadership. From 2017 to 2020, Dr. Cain served as the CDC Country Director in Tanzania. He previously served as the Tuberculosis Program Director for CDC Kenya from 2011 to 2017 and the Director of the CDC Western Kenya office in 2017, prior to his move to Tanzania.

Dr. Cain began his career at CDC in 2004 as an Epidemic Intelligence Service Officer in the Division of Tuberculosis Elimination (DTBE) in the International Branch, where he received the Paul C Schnitker International Health Award for global health. Dr. Cain earned his MD from the University of Pennsylvania School of Medicine in 2001 and has co-authored over 100 scientific articles.​