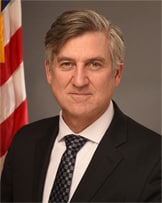 Mitchell Wolfe, MD, MPH, is CDC’s Chief Medical Officer. In this role, Dr. Wolfe provides support to the CDC Director, and interacts with key public health partners, Congress, the White House, and other government and public health officials. In addition, he leads the development of objectives and planning for CDC’s global health strategy, footprint, and budget.

Before moving to Asia, Dr. Wolfe served as a medical epidemiologist, and then team leader for the Clinical Outcomes Team in the Behavioral and Clinical Surveillance Branch, National Center for HIV/AIDS, Viral Hepatitis, STD, and TB Prevention. He has also performed several special assignments with CDC, including in the Bioterrorism Preparedness and Response Branch where he supported CDC’s response to the anthrax attacks in 2001 and participated in the first national population-based survey of mortality, disability, and mental health in Afghanistan.

Dr. Wolfe joined CDC as an Epidemic Intelligence Service (EIS) officer with the National Center for Environmental Health, leading investigations on infectious disease mortality, heat-related mortality, syphilis in prisons, and exposures to heavy metals related to a large forest fire. He earned his medical degree from the University of Vermont, his Master of Public Health degree from University of California, Berkeley, and his undergraduate degree from the University of California, Santa Barbara. He has an American Board Certification in general preventive medicine and public health. In 2020, Dr. Wolfe retired from the Commissioned Corps of the United States Public Health Service at the rank of Rear Admiral.