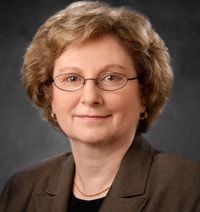 During the 2003 SARS outbreak, Dr. Khabbaz was the Associate Director for Science in the former National Center for Infectious Diseases (NCID), which led the CDC SARS response. Among her many duties, at that time, was clearance of all the documents that CDC released. She and Dr. Mary Chamberland, then Deputy Director in NCID’s Division of Viral and Rickettsial Diseases, were responsible for clearing the extensive number of public health guidance documents, alerts, and reports, produced by the Agency across the response. That was a huge task, considering that more than 800 staff from across the agency participated in the response, with nearly 100 deployments to assist with domestic and international investigations in several countries. Ensuring that CDC provided consistent and accurate information was critical for the Agency’s credibility and helped to position CDC as a reliable source for public health information before, during, and after the crisis. “The events surrounding SARS unfolded and escalated very quickly as infected patients traveled, became ill, and started chains of transmission in Hong Kong, Vietnam, Singapore, Canada, and other places,” said Dr. Khabbaz.

Dr. Khabbaz recalls how in a matter of weeks, as a network of global laboratories pulled together, the novel coronavirus responsible for the outbreak was identified: “CDC had to also quickly develop as we always do a SARS case definition for surveillance purposes.” Because of the uncertainties and the fear resulting from the pandemic nature of the disease, the need for information was huge, and many groups and individuals including public and private healthcare providers and organizations, national and global public health partners, travelers, and the travel industry turned to CDC for advice and for case-by-case consultations. The CDC teams worked quickly to develop guidance documents for surveillance and reporting; diagnosis; infection control; laboratory testing, sampling, and clean up; and specimen handling, collection, and shipment—along with travel advisories and health alerts. Information was also provided for U.S. citizens living abroad and for international adoptions.

During that time, the United States was also experiencing normal seasonal flu and more than 1,000 unexplained respiratory illnesses were reported to CDC and countless additional illnesses were investigated as potential SARS cases by state and local health departments. In 2003, reporting this information was paper-based and then entered electronically and merged with laboratory data. Laboratories were looking for multiple types of pneumonia, influenza viruses, and other viral respiratory illnesses. As specimens flooded in, anxiety was high among patients, healthcare providers, public health officials, and the public because we did not have a rapid test to reliably diagnose SARS infection.

Over the last 10 years, many of the lessons learned from SARS have become an integral part of CDC’s response strategy. SARS was one of the earliest and biggest responses to use the Incident Command structure with response teams, and the response highlighted the value of the emergency operations center (EOC). Dr. Khabbaz emphasized that SARS also underscored the need to strengthen collaborations and partnerships among national and international clinical, public health and veterinary communities, and spurred the development of new International Health Regulations focused on strengthening public health capacity globally.

Dr. Khabbaz stated that CDC’s newly created EOC in the basement of the old Building 1 was activated for the first time on March 14, 2003, during the SARS outbreak. “Two years earlier, when we were dealing with the anthrax bioterrorism event, CDC used one of its old Auditoriums as a makeshift EOC.” The EOC enables CDC to quickly organize and mobilize its scientific experts into teams that are in close proximity and able to collaborate and coordinate efforts in an efficient and timely manner.

The collaboration of the global public health community, in which CDC’s plays such a significant role, was impressive and memorable during SARS. “Nurturing our collaborations with global, national, state, and local partners is invaluable because, as was clearly shown during the SARS outbreak, we do not know where or when the next threat will emerge. Therefore, we must continue to build and maintain capacity, infrastructure, and communication ties with our partners here in the U.S. and globally.”

Last, Dr. Khabbaz stresses that CDC needs the next generation of scientific tools to remain vigilant. She points out that by adopting and adapting the latest genomic tools, CDC could more quickly find patterns that can help us more quickly identify and control deadly pathogens. “This is not an option but a necessity,” she continued. “CDC must remain in the forefront of cutting edge laboratory technologies that will enable us to provide the level of health security that is not only expected of us, but absolutely necessary to meet the challenges of future emerging infectious diseases and other health threats. 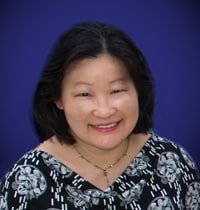 I jumped on the opportunity to volunteer when I saw the call for SARS response volunteers in 2003. I served on the SARS Epidemiology and Surveillance Team and contributed to the SARS daily reports. Although I had relished the thought of putting my Chinese knowledge to good use if deployed, I ended up staying in Atlanta during the SARS response. However, I still enjoyed the work — the urgency of it, the challenges, and being a valuable member of the team. I was thrilled to participate in the CDC response to SARS in 2003. It was a unique and incredible experience, one that serves as a reminder for all of us at CDC as we continue working together to successfully respond to public health crises. 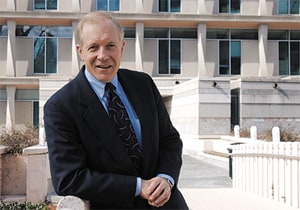 One of the first things SARS taught me was that for most of my professional life, I had been a risk communicator without knowing it. Before starting a second career at CDC, just six months before the first SARS cases were described; I’d devoted 30 years to health journalism, including 18 as CNN Senior Medical Correspondent. To me, public health journalism was all about trust, timeliness, transparency, responding to audience needs, and working with technical experts to assure that science became quickly accessible to everyone whose health and safety depended on it. At the time, I was the lead communicator for the National Center for Infectious Diseases (now the National Center for Emerging and Zoonotic Infectious Diseases). The latter position placed me in the role of Co-Lead for SARS in CDC’s new Emergency Communication System (ECS); I immediately discovered how these same principles form the foundation of effective public health emergency risk communication. SARS gave us the opportunity to both show and prove their effectiveness. On top of that, SARS was a great story of compassion, cooperation, scientific astuteness, and ultimate resolution.

The worldwide spread began at “Hotel M” in Hong Kong where a doctor, just arrived from Guangdong, in mainland China, had been exposed to cases of a rare, fatal respiratory illness. He checked into room 911 in February, 2003. Within days, he was sick and had unwittingly spread the disease to a dozens of guests; many also became ill during their trips. Epidemiologists traced more than 350 subsequent SARS cases around the world to “Hotel M.”

In the ECS, where we tailored CDC technical information to specific audiences, both from both professional circles and the general public, I was charged by the excitement of unfolding events. I was equally impressed by how focused CDC scientists became in tracking new and expanding outbreaks, investigating individual cases, informing treatment and prevention strategies, identifying a cause, and keeping the country and the world informed. My job included gentle pressure for constant communication, including early disclosure, even in the absence of confirmatory evidence. With the difficult lessons of 9/11 and the anthrax attacks fresh in mind, we had, as an Agency discovered the necessity for doing so; and from HHS through CDC leadership at every level, I found a willingness, and growing comfort among our scientists to speak openly about unconfirmed findings, nagging uncertainties, possible implications, interim guidance, and the pathway to concrete answers.

ECS worked closely with the World Health Organization (WHO), and our counterparts in Canada, Hong Kong, and Singapore, places especially hard-hit by SARS. Through these collaborations we shared news before it broke, and learned how to coordinate information among ourselves and with our outside audiences, we built credibility and strengthened public confidence. Ten years out, my strongest lasting impression is that CDC and the entire global public health community got it right; by working together we demonstrated respect for all stakeholders, including the news media and the public at large. The feedback from both bears this out.

Through ECS and our spokespersons, CDC addressed topics rarely considered prior to that time, namely stigmatization. Because SARS originated in Asia, people and places associated with Asia were being stigmatized. CDC spoke out asserting a return to social justice and civility. Journalists carried our message and situations improved. We addressed fears with empathy and tempered anxiety with emerging facts. We shared credit for every aspect of our engagement, including the identification of a novel coronavirus as the likely cause of SARS.

In the months after SARS, I was part of a WHO committee to establish a global standard that became known as outbreak risk communication. This standard gained support of WHO member states worldwide. Our work also informed the revised (2005) International Health Regulations (IHR), which now stress the necessity for rapid, complete, and collaborative information exchange about potential public health emergencies of international concern.

Ten years after SARS, the advancements in international public health communication capacity remain in place and continue to serve us well, as evidenced by our global collaboration in managing avian and pandemic influenza threats, and the on–going strengthening of IHR linkages. I’m proud to look back at that time, because we applied what we learned and remain better for it.

While assigned to Philadelphia STD Program in 2003 as a Public Health Advisor, I was notified by Project Officer, Ron Turski to report to the Minneapolis–St. Paul International Airport (MSP) to assist in the SARS outbreak. PHAs were deployed nationwide. My assignment was for one month in June, 2003 and I was stationed at MSP. During my assignment some of my duties included: 1) meeting all incoming flights from southeast Asia and distributed CDC′s SARS pamphlets; assessing the condition of ill passengers with elevated temperatures; arranging for transport of passengers to local hospitals as needed; and reviewing the manifest of incoming flights. I am happy to report that I did not have to place anyone in isolation and there were no fatalities during my stay at MSP. I have served on several temporary duty assignments during my career with CDC, but this was one of the most rewarding. This assignment raised my consciousness of CDC′s mission — “Saving Lives & Protecting People 24/7.” I also enjoyed collaborating with the various federal and local health agencies. It was a privilege to serve. 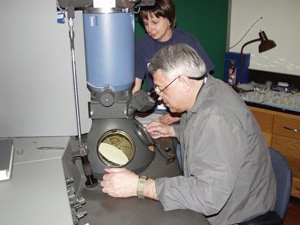 During the 2003 SARS outbreak I used electron microscopy to examine a cell culture isolate that was determined to have grown a coronavirus in a CDC laboratory. I have to say that this finding took my breath away, and this was the most exciting time in my career. The coronavirus result was quickly confirmed at CDC by using a different electron microscopy technique conducted by another CDC staffer and by using immunohistochemical, immunofluorescent, serologic assays, and by using a variety of molecular approaches. This was a large CDC team effort involving several different branches and many expert scientists. In the picture, Dr. Tom Ksiazek (now retired) and I are at the electron microscope the weekend after the identification had been made.