A common sight in Liberia during the rainy season, two trucks are stuck in mud, causing a traffic jam that forced CDC responder Karlyn Beer to sleep in her car overnight.

The Ebola epidemic, larger and more widespread than any previous Ebola outbreak, has caused public health responders to face new and challenging obstacles—from hard-to-reach places and impassable roads to personal protective gear, transportation, and laboratory needs. A global health crisis always generates new ideas and bold solutions to problems that surface during an outbreak response. Every day, responders come up with innovative ways to handle the unexpected challenges in this Ebola epidemic. In the past year, CDC responders have found themselves conducting trainings by flashlight, reconstructing bridges to get to remote villages, and finding other workarounds when resources were scarce. CDC and other organizations have also started work on better tools to battle Ebola in the future, through vaccine trials, new uses for technologies, development of rapid diagnostics, and partnerships.

“…Creativity is possibly just as valuable as all the hard facts and materials. When there is no money, people are working beyond exhaustion and options are limited, thinking creatively can be the thing to pull you through.”
– Leisha Nolen, Ebola responder, Sierra Leone 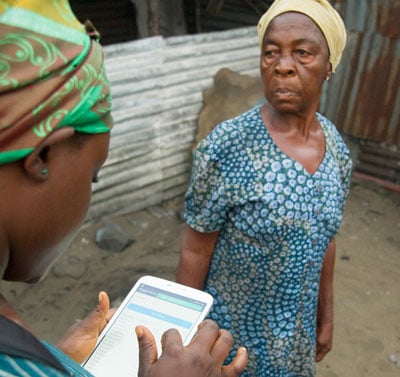 Contact tracer Dorissa Bestman uses a tablet to follow up on her daily contacts in the New Cru Town section of Monrovia, Liberia. A trial program conducted by CDC partner eHealth Africa in Liberia is using technology to load and store data where pencil and paper is the standard. 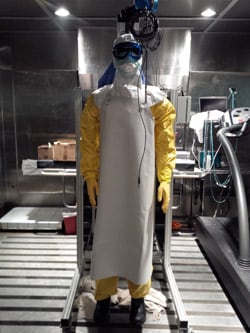 A NIOSH sweating thermal manikin with the PPE ensemble commonly used by Doctors Without Borders (MSF) for high exposure areas.

Healthcare workers in West Africa report that some personnel are able to wear their PPE for only 40 minutes at a time because of high temperatures and humid conditions. Even in the United States, where management of patients with Ebola is done in air-conditioned environments, uncomfortable PPE is a common complaint and causes a burden for healthcare workers.

In September 2014, President Obama announced a “Grand Challenge” to design improved PPE for use by healthcare workers during treatment of Ebola patients. CDC’s National Institute for Occupational Safety and Health (NIOSH) is partnering with other U.S. agencies on the “Fighting Ebola: A Grand Challenge for Development” to help healthcare workers on the front lines provide better care and stop the spread of Ebola. The USAID-led Grand Challenge includes developing, testing, and improving PPE to address issues of protection, heat stress, and comfort for healthcare workers.

NIOSH conducts research that supports the epidemic response and the Grand Challenge and is working closely with federal partners on the Grand Challenge, including (but not limited to) participating in crowdsourcing events to promote innovation, reviewing promising ideas that can be scaled to the field, and setting performance, test, and evaluation requirements. 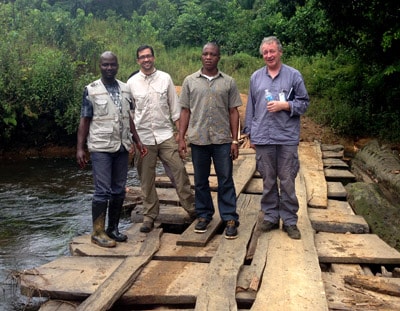 José Hagan (second from left) and his World Health Organization and County Health Department colleagues stand on a bridge they had to reconstruct to communicate with nearby villages.

Soon after CDC responder José Hagan arrived in Liberia, his team learned of rampant Ebola outbreaks in remote parts of the country. Hours later he found himself trekking miles into the jungle.

José described coming across grave after grave along the path as they approached a village. “When we finally got to the village, it was deserted. People were hiding in the forest or had fled to neighboring villages, taking the virus with them.”

José and his colleagues immediately started contact tracing. “We quickly learned that contact tracing wouldn’t work here. There were dozens of unknown Ebola contacts scattered across the dense forest and there was no cellphone signal to coordinate teams. Villages were connected only by narrow forest trails that were unreachable even by motorbike.”

José and his team set up a system based on a traditional method of communication used in these villages for hundreds of years.

“We worked with the village chiefs in the surrounding area to identify trusted members of their community who would be responsible for asking every villager how they were feeling each day. They would have a runner, usually a child, sprint the information back to the central village, which then connected every day with the district health team to pass on the information.”

As Ebola cases were found, José helped set up an isolation area and brought in Doctors Without Borders (MSF) to treat patients. 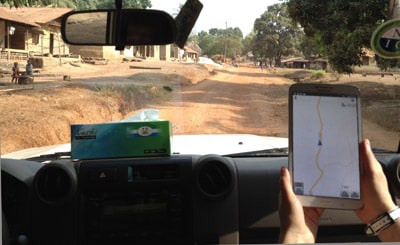 Teams responding to the Ebola outbreak in West Africa often face the challenge of finding people and communities living in remote areas. Maps of these regions often do not exist, aren’t correct, or are outdated. Basic information—location of houses, buildings, villages, and roads—is not easily accessible, making contact tracing extremely difficult.

To help the response effort, volunteers from around the world are using an open-source online mapping platform, called OpenStreetMap (OSM), to create detailed maps of Guinea, Sierra Leone, Liberia, and parts of Mali.

OSM’s goal is to make a free map of the world available to everyone. The Humanitarian OpenStreetMap Team (HOT) is a U.S.-based, non-profit organization that uses OSM data and tools to prepare and respond to humanitarian disasters. Because OSM data can be downloaded for free, volunteer mappers generate data that are useful to CDC and other agencies involved in the Ebola response. CDC is supporting and promoting volunteer mapping in affected West African areas where CDC teams work.

In the eight months since HOT began mapping countries with Ebola outbreaks, more than 2,500 volunteers mapped more than 750,000 buildings and hundreds of kilometers of roads, resulting in detailed maps of affected West African communities. Not only do these maps help first responders and other organizations around the world, they also contribute to the national information infrastructure essential to the recovery and rebuilding of affected regions. 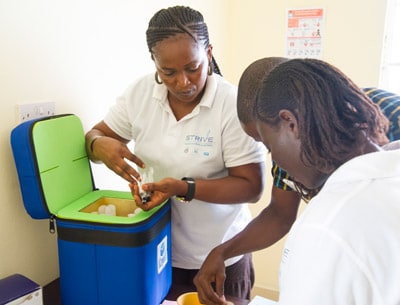 Nurses at a vaccination site in Freetown, Sierra Leone, sign for chain of custody for the Ebola vaccine.

CDC is conducting the Sierra Leone Trial to Introduce a Vaccine against Ebola (STRIVE), in collaboration with the Sierra Leone College of Medicine and Allied Health Sciences and the country’s Ministry of Health and Sanitation.

The vaccine trial, which launched in April 2015, is testing an Ebola vaccine among more than 8,000 health and other frontline workers in five districts of Sierra Leone that have been heavily affected by the outbreak.

The vaccine used in the trial, called rVSV-ZEBOV, cannot cause Ebola but can potentially stimulate an immune response to protect against the disease. The vaccine was developed by the Public Health Agency of Canada’s National Microbiology Laboratory and licensed to NewLink Genetics. The vaccine has been studied in hundreds of people in Africa, Canada, Europe, and the United States. Early studies have shown that the rVSV-ZEBOV candidate vaccine produces an immune response.

While it’s not clear yet whether the vaccine will be the Ebola prevention tool public health officials (and the world) are so eager for, the results of the trial may still help to save lives in the current and future Ebola outbreaks. The study will also strengthen research in Sierra Leone’s institutions by providing training and research experience to hundreds of Sierra Leonean staff. Much of this work will live on for the future, such as renovating structures and building new ones to enroll and vaccinate participants, handle data management, and store the vaccine.