Ebola survivor, Ruth, celebrates as she is released from the Ebola treatment unit. 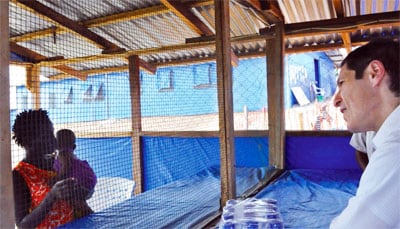 Dr. Tom Frieden speaks to a patient from the family visitor area at the Bong Ebola treatment unit in Liberia.

The West African Ebola epidemic is a vivid reminder that even in the 21st Century, disease can still threaten not only people’s health, but also the very foundations of national and international economies.

The Ebola response has been the largest international outbreak response in CDC’s history. Thousands of highly trained public health professionals, in Africa and the United States, have helped stop the epidemic in Liberia and are working to stop it in Guinea and Sierra Leone. CDC continues alongside many national and international partners in West Africa work toward the goal of zero new cases in the affected countries and to strengthen vigilance throughout the region.

When that day comes, West Africa will have many systems and resources that it did not have before—emergency operations centers, laboratories, stronger surveillance systems, vaccine trials, and CDC country offices. But just as people and their expert knowledge and skills made the difference in curbing the epidemic, people hold the key to securing national and global health in the future.

Having enough trained healthcare and public health professionals in the countries where infectious disease risks are greatest is the world’s strongest defense to prevent, detect, and respond to threats as soon as they occur.

Getting to zero for the first time in Liberia demanded a massive, worldwide response. Yet, the situation in Liberia also shows how difficult it is to stay at zero cases. There is a need for continued vigilance and the same kind of ongoing intensity and commitment to protect not only the residents of countries where outbreaks will occur, but also their neighbors around the world.