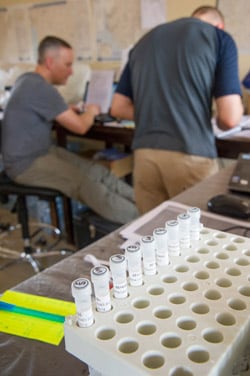 Laboratories, and the Ebola testing they perform, play a crucial role in responding to Ebola both in West Africa and in the United States. The results of each Ebola test can be life-changing for patients. A negative test result might mean release from a hospital or Ebola treatment unit (ETU) after a long illness for a survivor, or peace of mind for a person who might be worried they have Ebola. A positive test result could mean life-saving admittance to an ETU and information for loved ones and contact tracers to better understand and reduce risks of new potential Ebola cases. An effective lab infrastructure, therefore, is essential for countries to rapidly detect and contain Ebola cases.

When lab responders arrived in Liberia and Sierra Leone, they identified a need for labs and quickly set up mobile labs in both countries. CDC runs a lab in Bo, Sierra Leone, jointly ran another lab in Liberia with the National Institutes of Health, and supports labs in Liberia with the U.S. Department of Defense. CDC’s Bo lab processed more than 2,000 samples in a 3-week period and has now processed more than 20,000 samples. In addition, CDC supports labs in Guinea, Liberia, and Sierra Leone by providing training, testing equipment, and supplies, as well as overseeing the transition of labs to ministries of health.

In the United States, CDC has increased the number of labs that are able to test for Ebola. Prior to this outbreak, Ebola could only be confirmed at the CDC lab in Atlanta, Georgia, or the lab at the U.S. Army Medical Research Institute of Infectious Diseases. Now, 56 Laboratory Response Network labs across the country are able to test for Ebola, more than quadrupling capacity and vastly decreasing the turnaround time for test results.

“During our first days there, I went out to get samples from a person on a motorbike. He was very anxious because his whole district was worried about the result, which ended up positive, and we learned the next day that the patient had died. It brought home to me that what we were doing has life or death impacts.”
– Brandy Russell, Ebola responder, Sierra Leone 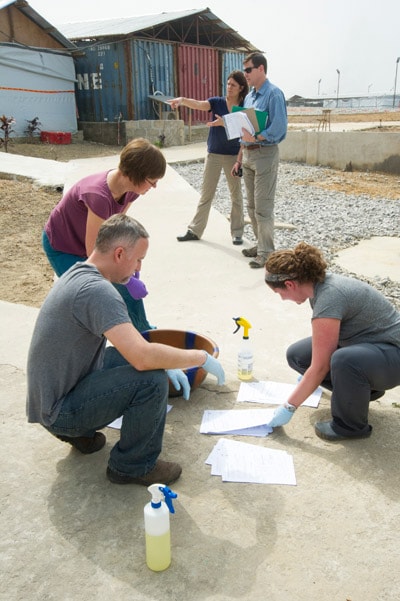 CDC epidemiologists who lead contact tracing teams often find people who have been exposed to patients with Ebola. If those people develop Ebola symptoms during their 21-day monitoring period, such as a fever, they are brought back to the treatment centers where healthcare workers wearing personal protective equipment carefully take a blood sample and send it to the lab. Early and accurate testing is critical. If the sample tests negative, the patient is referred to a non-Ebola clinic for diagnosis and treatment and for follow-up testing if indicated. If the sample tests positive, the patient is isolated in a treatment center.

That isn’t the end of the lab’s contribution to helping patients with Ebola, though. Patients who survive Ebola must eventually leave the treatment center. That happens only when their bodies have cleared the virus and the lab test comes back negative.

“We had a very little girl, about a year and a half old, who got Ebola from her mother. We don’t have many kids that small survive—and this child was so ill everyone thought she wouldn’t make it,” said Ute. “But she pulled through. And finally, I had a negative test for her and she could leave the treatment center. That made my day.” 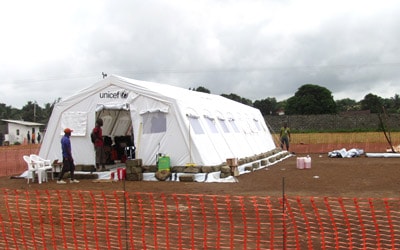 The initial mobile lab set up by CDC and National Institutes of Health in Monrovia, Liberia.

In August 2014, CDC microbiologist Barry Fields was deployed to Liberia to help set up a new mobile lab in Monrovia in collaboration with the National Institutes of Health (NIH). Setting up a molecular diagnostics lab in the field without utilities or infrastructure is quite a challenge.

When Barry’s team arrived in Monrovia, they realized very quickly that the outbreak had reached settlements in the city. A lab was critically needed in Monrovia to deal with these cases. The CDC-NIH team worked quickly to establish a mobile lab in close proximity to the ETU set up on the grounds of the Eternal Love Winning Africa (ELWA) Hospital.

Although Barry has worked in many outbreak investigations, the situation in Liberia was particularly challenging for him. One of his greatest concerns was how close the lab was to the ETU and the many patients walking back and forth. This foot traffic posed contamination risks for him and his team. According to Barry, having a team in which all members had international experience and knew how to work in an emergency situation with limited resources made a huge difference. Because of their collective experience, they were able to quickly adjust and set up more than 700 pounds of lab equipment that had been shipped to Liberia by CDC-Kenya.

Because of the heavy rains at that time in Monrovia, the mobile labs were eventually moved to a house formerly occupied by Samaritan’s Purse on the ELWA grounds. According to Barry, this facility is ideal, especially when compared to the tent they were in before. 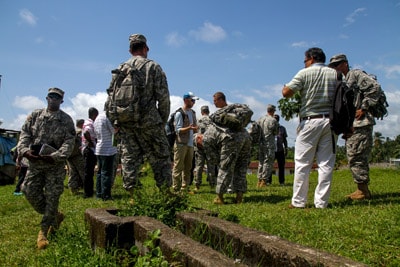 In West Africa, lab samples can arrive by many different methods—motorbike, couriers, helicopters—and too often the lack of transportation makes it difficult to get the samples to the lab quickly.

Sometimes it wasn’t just about how quickly the samples reached the lab, but the state they were in when they got there. “The samples arrived in all different types of containers and weren’t always labeled well,” said Brian Bird, a CDC laboratorian deployed to Sierra Leone. “We had samples in coffee pots and glass jars. It was quite a challenge.”

Despite the challenges of working in and supporting the field labs in West Africa, both Brian and John found the experience to be rewarding.

“When we were in Kenema, one of the highlights of my public health career was when we discharged 12 to 14 children all at one time,” said Brian. “They were so full of life. It was like looking at the future of Sierra Leone after it had come through such a horrible tragedy, but there it was looking you right in the face.” 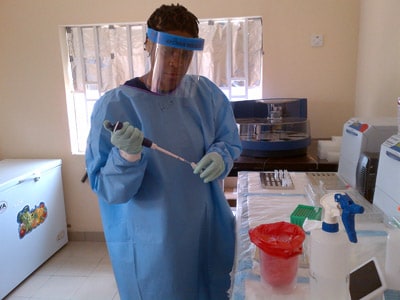 Like the previous four teams deployed to test blood samples for Ebola, Lab Team 5 was a group of highly trained lab technicians with extensive experience handling deadly pathogens in high security BSL-4 labs. They were prepared to work with Ebola under challenging circumstances during the most dangerous step in the testing process—removing potentially infected blood from a vial and inactivating it so that it could be safely tested in later steps.

Samples came to the CDC lab from eight different districts. To overcome frustrating delays in delivery from remote forested regions, the team completed plans to have samples carried to Bo by U.N. helicopter. A constant stream of samples arrived by UN helicopter, ambulance, taxi, motorcycle, and also by hand from the Doctors Without Borders Ebola (MSF) treatment unit adjacent to the lab.

While the team worked in harsh conditions, often with unreliable electricity, the best times were evenings when they would hear the community drumming from outside the nearby ETU.

“One of the doctors told us that was what families did when they celebrated the release of an Ebola survivor. We were doing their testing, and whether they could be released depended on us,” said Angela Sanchez.