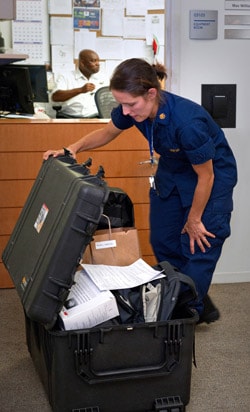 The 2014 Ebola epidemic in West Africa is the first in history. The first case was reported in Guinea in March 2014, and the disease spread in the neighboring countries of Liberia and Sierra Leone. Over the span of a year, the Ebola epidemic has caused more than 10 times as many cases of Ebola than the combined total of all those reported in previous Ebola outbreaks. As the outbreak became more widespread, travel-associated cases appeared in Nigeria, Mali, Senegal, and even countries outside Africa, including the United States. Overall, nine countries have reported cases of Ebola, more than 27,000 people have had suspected, probable, or confirmed Ebola, and more than 11,000 have died. These numbers are likely to be even higher, as many cases have gone undiagnosed and unreported.

Not only has this epidemic been unprecedented, but so has the public health response launched by CDC and its partners. Within a week of the initial report of Ebola, CDC had an expert team on the ground in Guinea. Over the past year, CDC has sent more than 1,000 employees to Guinea, Liberia, and Sierra Leone, many of whom have gone more than once. Thousands more have worked on the response from the agency’s headquarters in Atlanta, Georgia, other areas in the United States, and other countries around world. CDC hasn’t done this work alone— in every aspect of the response, CDC has collaborated with partners, such as the ministries of health in West Africa, the World Health Organization, CDC Foundation, other parts of the U.S. government, U.S. Agency for International Development (USAID), Doctors Without Borders (MSF), and other non-profit organizations.

The Ebola epidemic has been one of the most challenging global public health emergencies in recent times. The size and scope of this epidemic illustrate the need for stronger, sustainable disease detection and prevention capacity worldwide. On May 9, 2015, more than a year after the outbreak began, the World Health Organization declared the end of the Ebola outbreak in Liberia, but at the end of June, a new case was reported. Cases continue to be reported in Guinea and Sierra Leone. The situation in Liberia shows how important it is to maintain surveillance and response capacity even after an outbreak is over. CDC continues to work in West Africa with the goal of stopping new cases in the affected countries and keeping them from spreading.

July 9, 2015, marks the one-year anniversary of CDC’s activation and response to the Ebola epidemic. Many important partners have responded to the Ebola epidemic, and CDC has worked closely with many of these organizations. Rather than reflecting the overall world response, this report documents CDC’s work during the outbreak, through the stories of our responders.