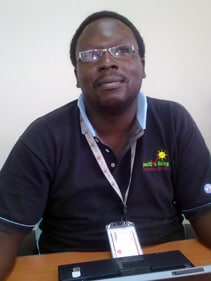 Chris Odero, site coordinator, said "Playing a role in the malaria vaccine trial has been the proudest moment of my life."

2010 Recruiting went smoothly and by February 2011, 1,620 participants had been enrolled in the trial. Children were randomly assigned to receive either the RTS,S/AS01 candidate malaria vaccine or a different vaccine (rabies or meningococcal). Neither the researchers nor the children’s parents knew which of the vaccines they received. Children were instructed to come to the study clinic or hospital whenever they became sick. They received free care and, if they had symptoms of malaria, they received a blood test to determine whether they had the disease. Children in the study will be followed for nearly 3 years.

Many Opportunities to Save Lives

2009–2011 On one occasion, a study clinician examined a very sick baby girl, who was breathing very rapidly. The baby’s mother was worried that her husband would not want the child admitted to the hospital. Dr. Oneko was called and convinced the mother that the child was critically ill and must come into the hospital or risk dying. That night, the child lost consciousness and required life support throughout the night. The following morning, blood test results indicated that the child was suffering from herbal poisoning. The examining clinical officer found evidence of “cupping” (a traditional practice in which a glass is heated and placed on the skin to remove bad spirits). The child’s mother revealed that the father, who preferred traditional to western medicine, had taken the child to a healer for the treatment. Realizing the child’s condition was worsening, the mother and mother-in-law joined forces and brought the child to the study clinic for care.

Thanks to the dedication of the study staff, the district hospital’s excellent facilities and the medical care the child received, she recovered. Says Dr. Oneko, “We have numerous examples similar to this one, where the presence of a dedicated study team, caring doctors and clinicians, and a modest but functional health system, resulted in a child’s life being saved. It is gratifying to work on a project where our work goes well beyond the trial itself.”

2011 On October 18, 2011, Bill Gates at the annual Malaria Forum in Seattle announced the trial’s first results: the vaccine had prevented about half of the cases of clinical and severe malaria in the children 5-17 months of age. The vaccine provided this protection in settings where there is ongoing use of other effective malaria prevention and treatment interventions: bed nets, effective antimalarial drugs, indoor residual insecticide spraying to prevent mosquito-borne transmission, and drugs to protect pregnant women and their fetuses from malaria’s adverse effects. “At the moment,” says Dr. Kariuki, “we are on track in the development of RTS,S/AS01 as the first malaria vaccine for African children.”

2012–2014 Over the next few years, additional trial results are expected to show how well the vaccine works in young infants when they receive it with their routine childhood immunizations and how long the vaccine protection lasts after immunization. These data will be critical to help researchers understand how the vaccine can be used most effectively to control malaria.