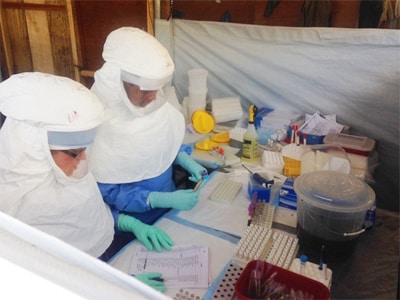 Team 5 members Aridth and Brandy in the “hot” lab in Bo, Sierra Leone.

What made CDC’s Bo Lab Team 5 different wasn’t just that it was the first all-woman team to run CDC’s Ebola testing lab in the heart of the Sierra Leone during the 2014-2016 West Africa epidemic – they were later followed by the women of Team 11. What made them truly unique was that they set records for the most Ebola samples processed in one day (162), the most samples tested in 21 days (2,012), and the most samples tested in 28 days (about 2,700) during the response.

Rapid Ebola testing is a crucial part of any Ebola outbreak response. It allows people who turn out not to have Ebola to receive appropriate treatment for their true condition – and to leave group isolation where they might catch Ebola from an infected person – and it gets people with Ebola into early treatment. Also, it can confirm when people who survive Ebola become virus free and may be released from Ebola treatment units.

Like the previous four teams deployed to test blood samples for Ebola virus, members of lab team 5 were highly trained lab technicians with extensive experience handling the world’s most deadly pathogens in highest-security BSL-4 labs. They were prepared to work with Ebola virus under challenging circumstances during the most dangerous step in the testing process – removing potentially infected blood from a vial and inactivating it so that it could be safely tested in later steps. Using an advanced robotic extraction machine, team 5 was able to average 96 tests per day. That was far more than the 25 tests per day average in August 2014, when team 5 leader Tara Sealy was a member of lab team 1 using a less advanced extractor.

“From start to finish, it takes six or seven hours for 50 to 100 samples – and we did two runs a day,” said team leader Tara, a microbiologist in CDC’s Division of High Consequence Pathogens. “We were the first team to use the new machine.” The CDC Foundation later delivered a similar machine to another Sierra Leone lab run by South African technicians; Tara delayed her homecoming to train them.

Samples came to the CDC lab from far and wide. To overcome frustrating delays in delivery from remote forested regions, the team completed plans to have samples carried to Bo by U.N. helicopter. A constant stream of other samples arrived by ambulance, by taxi, by motorcycle, and, by hand from the Doctors Without Borders Ebola treatment unit adjacent to the lab.

“During our first days there I went out to get samples from a person on a motorbike. He was very anxious because his whole district was worried about the result – which ended up positive, and we learned the next day that the patient had died,” said team member Brandy. “It brought home to me that what we were doing has life or death impacts.”

Complicating the effort was the lab’s unreliable electricity, provided by the Doctors Without Borders compound. When the lights went out, the CDC team found they had two broken generators. Team member Aridth rolled up her sleeves and repaired them. “I just did simple maintenance like I would do for any small engine,” said Aridth, who in addition to being a microbiologist has a military background.

“We were having terrible generator issues and it was making for long days,” Brandy said. “When Aridth got both operating right it was a big deal. We had a little celebration – well, really it was just cheers and high fives and then back to work. We didn’t even make it to dinner that night.”

During their 28-day rotation the team worked 12- to 13-hour days with no days off. They wore hot, bulky PAPR suits for two or three hours at a stretch. “There was lots of sweating. I did more sweating in those suits than I did in my whole life put together,” said team member Angela.

The best times were evenings when the team heard drumming coming from outside the nearby Ebola treatment unit.

“When we first heard the drumming I wondered if it was church service. But one of the doctors told us that was what families did when they celebrated the release of an Ebola survivor,” Angela said. “That did make us feel really good. We were doing their testing, and whether they could be released depended on us.”

After returning home, all the team members volunteered to return to West Africa for another rotation. “I have a 2-year-old at home and it is difficult leaving him, but it is my job,” said team leader Tara. “I just hope one day my son is proud of me.”