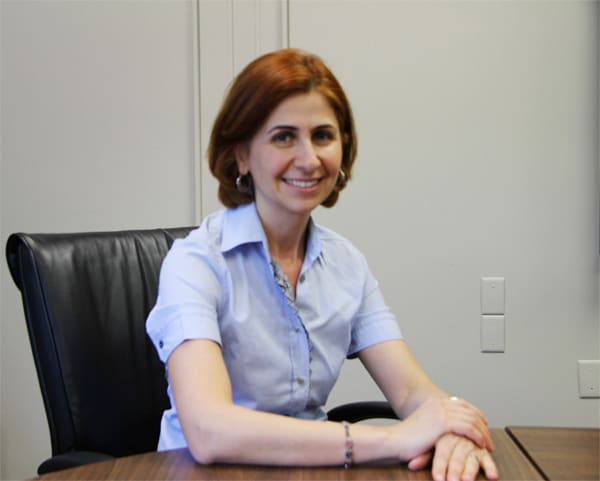 Selcen in her office in Pittsburgh, PA.

Scientists on the home front in the United States are working hard to ensure the greatest possible protection for Ebola responders in West Africa. Selcen has become one of the go-to experts on personal protective equipment (PPE), a critical component of the response.

“I started working on protective clothing and equipment during my post-doc and haven’t stopped since,” she says. For over five years, Selcen, a physical scientist at CDC’s National Institute for Occupational Safety and Health (NIOSH) has researched ways to improve PPE for healthcare workers.

PPE is equipment worn to protect against hazards such as chemical agents and infectious materials. Examples of PPE used for Ebola include (but are not limited to) masks/respirators, head covers, faceshields/goggles, gowns/coveralls, aprons, gloves, and footwear covers. “A common misunderstanding is that any type of fluid-resistant garment can protect against all kinds of hazards,” explains Selcen. The key to proper selection and use of PPE is to understand the hazards and the risk of exposure.

In March 2015, Selcen and two other researchers from NIOSH had the unique opportunity to attend a meeting hosted by the World Health Organization (WHO) in Geneva, Switzerland. On the agenda was a discussion on the short- and long-term needs for PPE. “We got to listen to the experiences of real end-users of PPE – the doctors treating patients with Ebola in West Africa – and find out what works and doesn’t work in the field,” says Selcen.

During the WHO meeting, the winners of the Fight Ebola Grand Challenge presented their prototypes. The U.S. Agency for International Development (USAID), in partnership with other government agencies, including CDC, had issued a challenge to design improved PPE for use by healthcare workers during treatment of Ebola patients in hot environments like West Africa. “I was impressed and inspired by the creativity of the inventors,” she says. Along with chocolates from Switzerland, Selcen brought back a new perspective on enhancing protective clothing and addressing the needs of PPE users.

Since the start of the Ebola response, Selcen has responded and helped to write responses to approximately 100 PPE-related questions from healthcare workers, safety professionals, and volunteer organizations. “Most of the time, I was asked if a specific type of PPE would provide sufficient protection in regards to viral penetration resistance and fluid resistance or what to look for when selecting PPE” she says.

The large scale of the Ebola epidemic has directed particular attention to the PPE used by healthcare workers. Increased dialogue between researchers, policymakers, and PPE users reiterates the need to make occupational safety and health a priority during an emergency response. “I feel more satisfied about my job, because I see the impact. There’s more awareness about the value of PPE in protecting workers against Ebola but also other workplace hazards as well,” says Selcen.