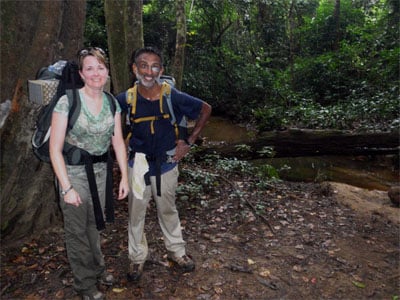 Satish and his colleague Laura hiking in the Liberian jungle on the way to a remote community with suspected Ebola cases.

A health system that was not prepared for an influx of Ebola cases. Limited knowledge of the virus and its symptoms among the community. Ongoing outbreaks in crowded urban centers constantly feeding new outbreaks in remote areas.

There are several factors that contributed to the Ebola outbreak in West Africa, and it has taken a large number of partners and strategies to help get it under control.

One such strategy is RITE (Rapid Isolation and Treatment of Ebola), a strategy developed by the Liberian Ministry of Health and Social Welfare, CDC, and other partners.  RITE teams are mobilized to respond to remote villages and towns following reports of Ebola cases by local and county health officials. Their goal: to stop the chain of Ebola transmission.

“Cases of Ebola in Liberia were showing up in remote areas.  In many instances, someone who contracted Ebola in the capital city of Monrovia brought it back to their community,” says Satish, a CDC medical officer and RITE team member. “This led to sustained transmission of the virus that was hard to stop because it was so difficult to reach these communities.” 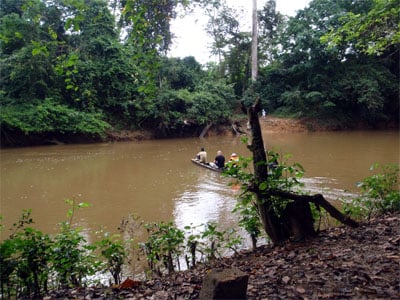 RITE team members take a canoe as the last leg of their day-long journey to a remote village with suspected Ebola cases.

To get to one village, Geleyansiesu, his team first had a 4-hour drive from Monrovia to the Gbarpolu county seat, Bopolu.  Following a day of planning with county health officials and international partners, teams set off again on a 2-hour car ride to a small village drop-off point.

“Then we had a three-and-a-half hour trek through the jungle hiking along narrow paths, walking across bridges that might consist of a single log, and a dugout canoe ride across a river,” Satish says.

Once they arrived at the village, Satish and his colleagues stayed for several days, sleeping in tents and eating military rations for meals.

“The villagers liked that we stayed with them. It helped establish a sense of trust. They knew we were there to make sure they got the resources they needed,” Satish said. .

During this particular RITE deployment, the team visited every household in the village, conducting active surveillance by asking villagers about symptoms of Ebola and identifying people who had come in contact with symptomatic patients.  One of the goals was to identify the clinical resources that were needed for the village, and relay that information back to international partners who were following the RITE team to set up a temporary care facility.

In this and other RITE deployments, CDC teams not only worked on active case finding and contact tracing, but also identified the basic sanitation and food needs in communities.

“One of the communities we visited was banned from the closest market because of Ebola fears. We called in the World Food Program to help. Another community had broken water pumps and could not access safe water. We found partners that could fix the pump,” Satish says.

Satish is going back to Liberia in March.  Even though the RITE strategy has helped cut down outbreak duration and reduce cases, he says, “It is important to remain vigilant – we don’t want to become complacent and have a resurgence of cases”.