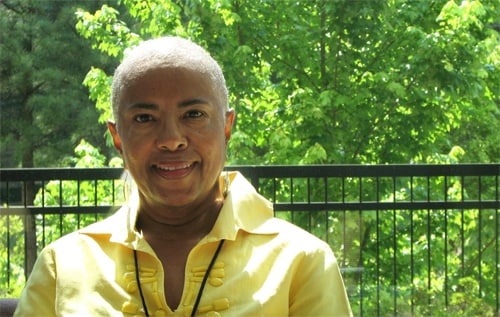 Sandra Jones the day before she left for Sierra Leone.

On May 9th CDC deployed its 1,000th official employee to West Africa as part of the agency’s largest international outbreak response.

Sandra Jones was part of the group that helped the agency reach this milestone. She’s a 66 year-old CDC retiree, but volunteered to return to work when she learned the agency was looking for retired employees to help with the Ebola response.

“As a retiree, being on the outside, I saw how hard the agency was working and wanted to be of service. I’ve been given this opportunity to go to Sierra Leone on the health promotions team, and am so grateful to be able to contribute,” Jones said.

Jones was a pediatric nurse before starting her twenty year career in CDC’s Division of Adolescent and School Health, where she spent decades working on research and policy for our youngest citizens.

“Throughout my career I worked with children in the clinic, in their schools and behind a desk doing research,” she said.  “I am hoping to have the opportunity to work with some of the children orphaned by Ebola while I am in Sierra Leone.”

CDC has now sent over 1,000 employees to Liberia, Guinea or Sierra Leone, many of whom have gone more than once. Thousands more have worked on the response from the agency’s headquarters in Atlanta.

“I’ve kept busy volunteering, teaching adults how to read, and going on a service trip to Haiti. But going to Sierra Leone gives me the opportunity to be in the presence of history, and proves 66 is not too old for anything,” she laughed.