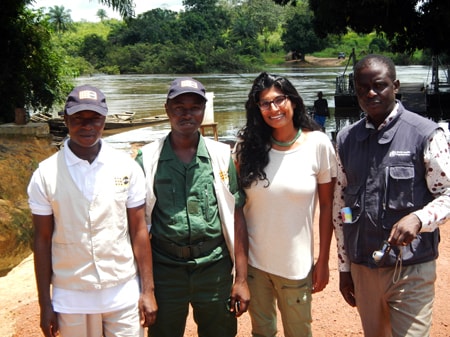 CDC disease detective Rupa with Guinean colleagues, at the river border between Guinea and Sierra Leone

Small boats regularly cross the river that divides the countries of Guinea and Sierra Leone, taking people back and forth across the border. Some of these people carry the deadly Ebola virus.

It was along this river bank that Rupa, a CDC disease detective, found herself training Guinean medical workers who were screening river passengers for symptoms of Ebola.

“They had two physicians, a nurse and a couple other people working in a tiny health post made out of a tarp,” she said. “They asked me to go there to do an infection control lesson. The staff was really welcoming and happy to have the training.”

Rupa’s work in Guinea is the first time she’s responded to a humanitarian crisis in a non-clinical role. Before becoming an officer in CDC’s Epidemic Intelligence Service she worked for MSF, often referred to as Doctors Without Borders. She struggled with not having a role in direct patient care during her recent deployment, especially when Ebola patient admissions tripled at the MSF facility adjacent to her office during her thirty-day trip. 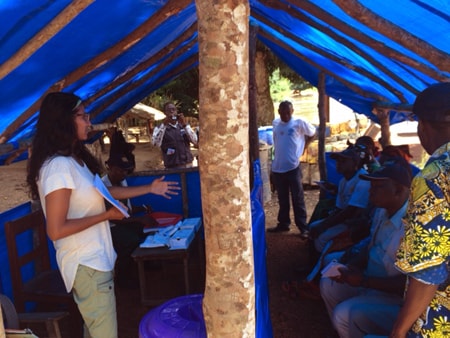 “Seeing how stretched thin they were with human resources was the most devastating, helpless, heartbreaking feeling possible,” she said. But she found a way to help by educating MSF nurses about infection control. “It really opened up some new roles for us in the field and showed us some other needs that were different from surveillance and data entry.”

Rupa also spent time in Conakry, the capital of Guinea, working with their Ebola data management system and on their contact tracing abilities. Ebola was the talk of the town, she said. “You couldn’t go through 10 minutes of your day without hearing local people speaking about Ebola and what is going on. Everyone’s lives have changed.”

And life will likely be different for a while. Rupa admits, “There is a long road ahead in the battle against Ebola. However, I feel I was able to help. We were able to identify what the needs are as far as infection control, triage, and where we can place CDC personnel.”

She hopes that she will once again be placed in Guinea. When asked if she would volunteer for another deployment she said, “Absolutely.”