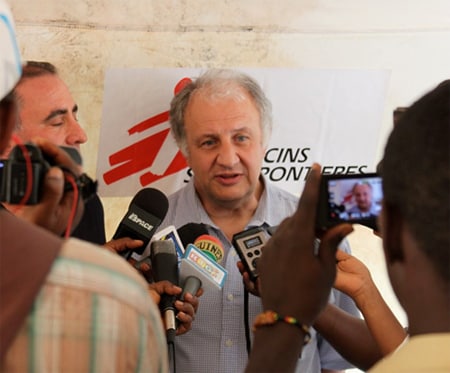 Dr. Pierre Rollin is the deputy branch chief of the Viral Special Pathogens Branch at CDC, and serves as the director of WHO’s Collaborative Center for Viral Hemorrhagic Fevers.

“Nobody thought that an Ebola outbreak would reach that many cases ever in any country,” Pierre Rollin, M.D., says of his time in West Africa.

Rollin is the most experienced Ebola virus hunter at the Centers for Disease Control and Prevention. He first encountered Ebola at CDC in 1995 in Kikwit, Democratic Republic of Congo, and has been on the forefront of CDC’s response to every outbreak since. He spent months in Guinea and Liberia at the start of the 2014 epidemic, and is scheduled to go back this week.

“We’re talking about countries that never saw this virus and had no system in place to handle a large outbreak. It’s where nurses are given 10 pairs of gloves a week to treat patients. You can easily imagine that’s not a way to protect yourself,” Rollin says.

Experience has taught Rollin that proper protection from the virus and rapid identification of cases are critical to stopping the spread of Ebola. “You’ll see that over the past 20 years, if infected people are removed from the community within the first two or three days of the disease you can stop the chain of transmission,” he says.

And once a case is isolated it is crucial that healthcare workers protect themselves from the deadly virus. Rollin played a critical role in training healthcare workers on infection control both in West Africa and in the United States. He’s one of the Ebola consultants for CDC’s training course for responders traveling to West Africa, and he was among the first CDC employees to arrive in Dallas and New York when they were faced with treating an Ebola patient.

Ebola’s arrival in America was met with fear, but Rollin relied on his experience with the virus to put the situation into perspective. “People should be confident that the fear of Ebola coming and wiping out the U.S. is based on nothing. Two decades of Ebola research has taught me that when an infected patient comes to a developed country there may be a handful of secondary cases, but it’s stopped there.”

Rollin is looking forward to getting back to West Africa and getting back to the basics. “We have to use the recipe that has worked over and over with Ebola. Rapid identification of cases, tracking their contacts, and proper infection control.”