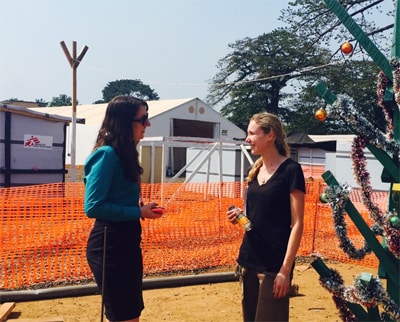 Nicole (left) visits an MSF Ebola Treatment Unit (ETU), where she discusses how to track patients and make sure their loved ones continue to receive updates after they enter the ETU. Employees of the ETU tried to lift spirts during the holiday by crafting a Christmas tree out of a boot drying rack.

In the Kroo Bay Slum in Sierra Leone, life expectancy was 35 years – and then Ebola hit. It was in that neighborhood that Nicole, a 31-year-old CDC communications expert deployed to fight the epidemic, saw what she was up against.

“People are living on top of each other, lacking basic sanitation and medical care. It was really eye opening. It’s vital that we do what we can to stop this outbreak,” she says.

For the month of October, Nicole served on CDC’s Health Promotion team in Freetown, Sierra Leone, the crowded capital city. She helped craft and disseminate Ebola-prevention messages for the general population. During her deployment the team began to shift its messaging from the basic “Ebola is real” to steps people can take to protect themselves and their families from the virus.

The visit to the slum highlighted how hard those messages are to follow.

“Washing your hands isn’t easy when you don’t have regular access to clean water, quarantining someone in a separate room isn’t easy when an entire family lives in one room, getting help isn’t easy when ambulances can’t get in because of a lack of roads,” Nicole says. “It really made me realize just how critical it is that we be on the ground trying to stop the virus.”

Nicole says her work has never been so important or gratifying. “I felt like the work we were doing was having a direct impact on saving lives.”

Nicole helped with the rollout of the “Ebola Big Idea of the Week” – a collaboration between CDC, the Ministry of Health, the National Ebola Response Center and local journalists. Together they synchronized educational messages that were shared across print and radio media outlets. She also helped organize an Ebola 101 training course for Sierra Leonean journalists and community leaders.

“Working with local journalists and leaders helps us get important health information to the public. We value those relationships and rely on them in our effort to stop Ebola,” she says.

Nicole’s experience in Sierra Leone has had such an impact on her that she volunteered to go back again just two months later. “Deciding to go back over the holidays was a tough decision, especially since I have a six-year old son. But I knew he would be spending Christmas with his father, whereas other CDC employees might not have the same arrangement and would have to miss this time with their children.”

Nicole is now leading a team of six communicators and health promotors from CDC’s Freetown headquarters. “I’m working with many of the same Sierra Leonean and international partners that I did in October. It’s neat being back and seeing the evolution of systems and processes.”

Armed with the memories of her visit to Kroo Bay Slum, Nicole plans to use her current deployment to build on the progress that has been made, and continue the fight to get to zero cases in Sierra Leone.