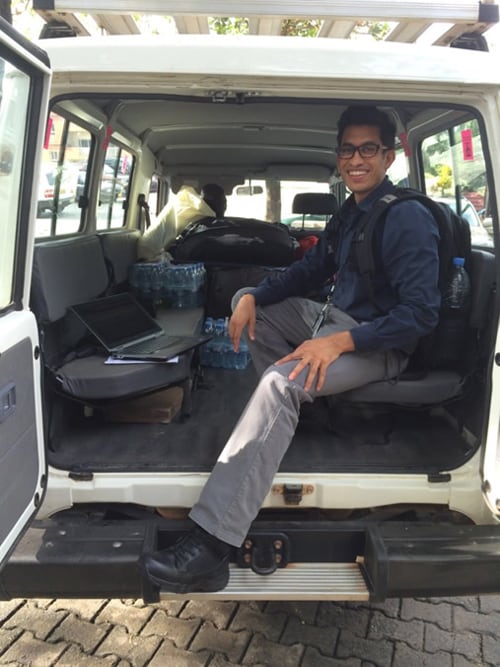 Neil prepares for the two-and-half hour drive to Bomi County in Liberia.

Ambulance chasing is a discouraged practice in the US – but in Liberia it’s exactly what Neil, a CDC disease detective in the Center for Global Health, had to do as part of his efforts to stop the spread of Ebola at its source.

“We would follow ambulances that were called to pick up suspected Ebola cases. We would keep our distance and observe how they collected patients, and would make corrections to any lapse in infection control. As soon as the ambulance left we would start the contact tracing investigation,” says Neil, who recently returned from a month working in Liberia, during which time he was based in Bomi County. Bomi is a rural area about two hours away from Liberia’s capital.

Rapidly identifying contacts of Ebola patients is a key component to stopping the spread of the virus. Each patient with Ebola can have as many as 10 contacts, all of whom need to be monitored for 21 days. “If you skip just one day, it might be the day the contact comes down with Ebola and a whole new chain of Ebola transmission can start all over again,” Neil says.

Over one hundred Ebola cases have been identified in Bomi County, and while Neil was there, he helped local health officials monitor the hundreds of contacts from all of these Ebola cases. “We made major strides in terms of helping them organize their data better, so they can keep better track of who’s a case and who’s a contact,” he says.

Neil’s wife, Lauren, was also hard at work in West Africa. She, too, is a CDC disease detective and was deployed to Senegal at the same time. Communication was difficult with no Internet and often no electricity. They would use local phones to call each other, and one day Neil got a call that no husband wants to receive.

“One of the biggest risks of working in Africa is driving because the roads are often poor and safety standards are frequently lax. My wife was in a horrible car crash, it was a really close call. Thankfully, no one was hurt in the crash, but I was worried because if she had gotten hurt, there’s limited access to quality emergency care,” he says.

Neil says he was prepared to walk into a tough situation when he set foot in Liberia, and while challenging, he left very hopeful.

“It’s really a terrible outbreak, I’ve never seen anything like this before,” he says. “But at the same time, I saw how hard people were working and how committed they were. In the short time I was there I saw major progress being made.”