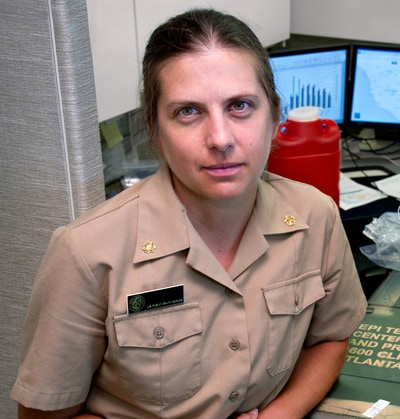 During her previous deployment several months ago, Ebola seemed to be quieting down in the remote part of Liberia where Leisha was posted. There were no new cases in the month she was there, so she and her colleagues got to work, trying to educate people to recognize new cases and prevent spread.

Like other CDC disease detectives, Leisha has been there and back – and back there again. This week she returned to West Africa for her second 30-day tour of duty to help get the worst Ebola outbreak in history under control.

“Unfortunately that didn’t take full effect. A month after I was there, Ebola came back to these communities,” she says. “The devastation is horribly tragic.”

Now Leisha is on the way back to a different part of West Africa – with a much larger team. They aren’t bringing new or untested tools – instead they are doubling down on the tried-and-true methods that have stopped every Ebola outbreak so far.

“We partner with local people to find every person with Ebola, find out their close contacts, locate these contacts, and monitor them for signs of fever for the three weeks it could take from infection to disease,” she says. “If they show any symptoms, we isolate them, find their contacts, and continue the process until all patients are isolated and all contacts are symptom-free for at least three weeks.”

“I can’t imagine I’m going to fix it – it will take many months, with and multiple teams from, CDC and other organizations to get a handle on this,” she says.