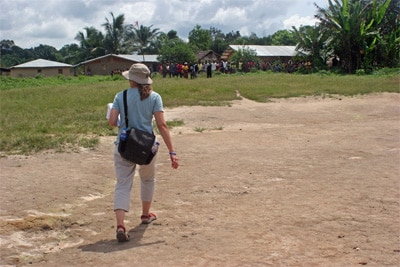 CDC’s disease detective Kim and her team were dropped off in a football field near Geleyansiesu, Liberia, by a US military helicopter. The remote village had a number of Ebola-related deaths, and it was essential for CDC to be on the ground quickly to try to stop the spread of the virus.

When the military helicopter dropped her off in a remote village north of Monrovia, Liberia, Kim knew that two men – both fathers – had died there. Was it Ebola? That’s what she was there to confirm.

CDC deployed Kim to Liberia for just this kind of job. Her mission: to rapidly investigate possible Ebola outbreaks in hard-to-reach places. If she saw cases of Ebola, her team would quickly start active case finding and contact tracing to limit spread of the disease.

“Earlier in the epidemic most Ebola cases were in the densely populated city of Monrovia, but we found as it continued patients would leave and go back to their rural homes. This was causing outbreaks in areas that were far from Ebola treatment units,” Kim says.

Kim and her colleagues supported the Ministry of Health and Social Welfare’s strategies for responding to reports of flare ups, including partnering with the World Health Organization and non-government organizations to intervene as quickly as possible. CDC worked with ministry colleagues to isolate patients with cases of Ebola and arrange their safe transport to the nearest Ebola treatment unit and then track down each patient’s contacts.

That’s what Kim’s team began doing as soon as the helicopter dropped them off. They knew the two dead men’s wives and children had tested positive for Ebola, and they needed to find out if there were more cases. 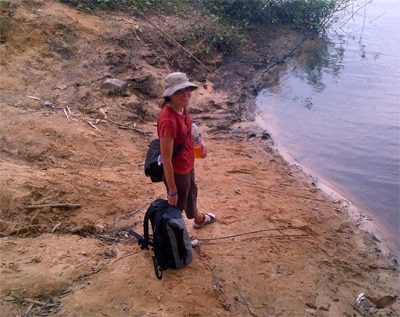 Kim had to walk several hours and canoe across the St. Paul River after an Ebola outbreak investigation. Here, she is waiting to be paddled across by a ferry captain named "The Navy."

“In the end, we helped identify 22 cases – almost three-quarters of whom unfortunately died,” she says. “Over time, we started hearing about rural outbreaks faster. At the beginning it could take weeks to hear about the first case, but by the time I left in late December, we were hearing about them within the first few days of illness. This led to outbreaks being resolved quicker, in less than half the time.”

Kim recalls a case in which they received a report of two very sick people who had driven from Monrovia in a car with a patient with a suspect case of Ebola. When they arrived at the patient’s home, Kim and her team found more than twenty people living in the house.

“It was late in the evening and we had to scramble to buy chlorine and buckets to help them disinfect the home. We worked with the county health team to move the people to a quarantine facility the next day, and 21 days later every one of them left without becoming sick with Ebola,” she says.

Kim says it was remarkable to see the improvement in Ebola awareness and detection during the two months she spent in Liberia.

Her fifteen-year career with the Centers for Disease Control and Prevention has taken her around the world. She’s lived in Kenya, Guatemala, and now Thailand, where she is the Influenza Director. She’s been to Africa dozens of times. Yet, she says her deployment to Liberia was one of the best experiences of her career.

“During the Ebola outbreak, I was given the opportunity to work on the front lines of public health. Many people were so grateful that CDC was there to help. It was motivating and gratifying at the same time.”