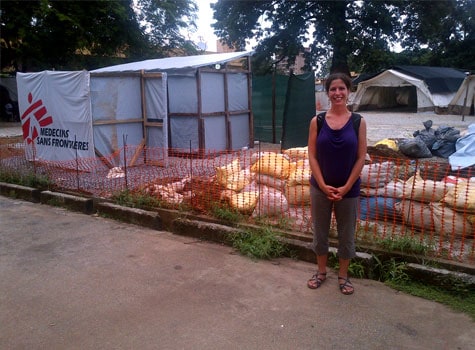 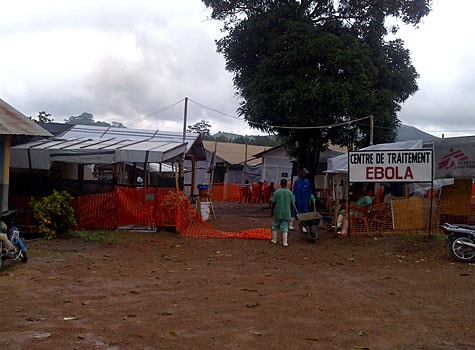 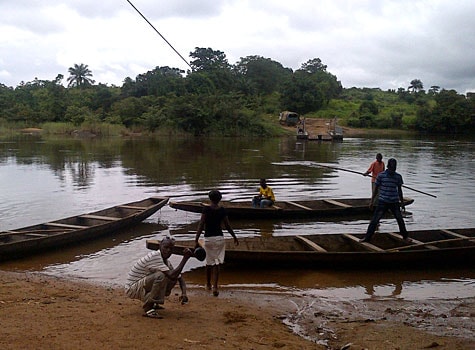 Looking from Guinea to Sierra Leone across the porous border.

Crammed with six other passengers in a tiny plane circling a dirt runway in a remote area of Guinea, Kelsey peered out the window to see a pickup truck frantically chasing goats out of the landing path. That landing might seem nerve wracking, but Kelsey says it was the easiest part of her mission to Guekedou, Guinea – the epicenter of the Ebola outbreak exploding in West Africa.

Kelsey, a CDC disease detective, still had in front of her a three-hour drive along some of the worst roads in Africa. On arrival she learned that frightened local residents had threatened to attack foreigners whom they believed were the source of the awful hemorrhagic fever decimating their community. All of the other international aid workers where huddling in the small hotel where she’d be staying.

“It was surreal walking into that,” she says. “Even though nothing ended up happening, it was a crazy time.”

She quickly saw first-hand one of the reasons Ebola had managed to spread so easily through three West African nations. Families often live on both sides of the shallow, narrow river that divides Guinea from Sierra Leone and from Liberia. People can easily shout across the muddy stream, and boatmen readily ferry travelers from one nation to the next. If people can cross freely, so can Ebola.

Armed with her “intermediate” French and CDC training, Kelsey visited area villages to make contact with the few people. Although the nation’s official language was French, sometimes only one person in a village might speak it, so she worked with that individual to translate important health messages into the local language. In this manner, she worked to gain the confidence of village leaders and to train community health workers to spread the word about how to avoid getting – and stop spreading – Ebola.

These community health workers are the most important key to stopping Ebola. These largely uneducated workers already are part of the area’s fragile public health system, working mostly to promote vaccination and encourage women to get pre- and post-natal care, and often working with very limited healthcare resources. Kelsey’s team trained them to follow up on people who had been exposed to Ebola patients, checking on them every day for the three weeks it could take to develop symptoms. Any person with symptoms of Ebola becomes a suspected patient, and all of this patient’s contacts must be followed for another three weeks. Every day, except Sunday, the workers report their findings to a supervisor.

“One day, the community workers reported that a person with Ebola symptoms had refused to go to into isolation at the treatment center,” Kelsey says. “It was a Monday so the report was two days old. Worried, I met with the village chief, who pressured the person to go to the center.”

Out of that one meeting, many lives were saved. The grateful village chief presented Kelsey with a symbolic gift of cocoa pods and a coffee plant. For her, the gift symbolized not how much she gave, but how much she received.

“You go over there with a lot of ideas about what you want to help people understand, but the people you encounter have very different backgrounds and beliefs than you have,” she says. “I learned so much about how to reach people and communicate more effectively, no matter whether the people I am working with are Guinean, or Sierra Leonean, or Liberian. What they have to teach us is invaluable.”