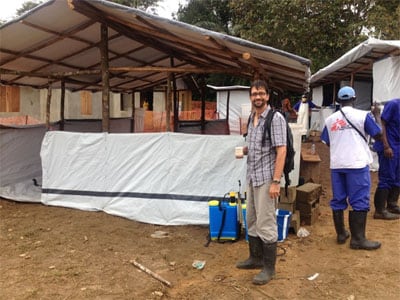 Jose standing outside the treatment center in Rivercess County, Liberia.

When Jose, a CDC Epidemic Intelligence Service Officer (“disease detective”), arrived in Liberia in October 2014, he was supposed to help with hospital infection prevention and control. However, soon after landing, his team learned of rampant Ebola outbreaks in remote parts of the country. Hours later he found himself trekking miles into the Liberian wilderness.

Jose described coming across grave after grave lined up along the path as they approached a village.

“When we finally got to the village,” he said. “It was deserted. People were hiding in the forest or had fled to neighboring villages, taking the virus with them.”

Jose and his colleagues immediately started contact tracing – the gold standard for tracking an outbreak back to its source and identifying everyone potentially exposed.

“We quickly learned that typical contact tracing wouldn’t work here. There were dozens of unknown Ebola contacts scattered across the dense forest area and there was no cellphone signal to coordinate teams. Villages were connected only by narrow forest trails that were unreachable even by motorbike.”

Rather than rely on modern technology, Jose and his team set up a system based on a traditional method of communication used in these villages for hundreds of years. 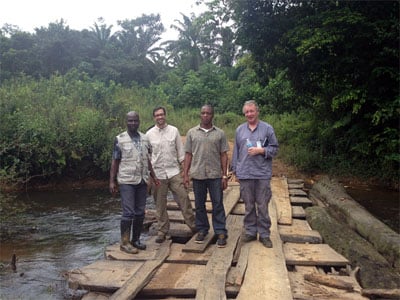 Jose and his WHO and County Health Department colleagues standing on a bridge they had to reconstruct in order to communicate with nearby villages. (Left to right: Augustine Newray (Liberian Ministry of Health and Social Welfare), Jose (CDC EISO), Wilmot Smith (Rivercess County Health Team), and Jarlath Tunney (WHO).)

“We worked with the village chiefs in the surrounding area to identify trusted members of their community who would be responsible for asking every villager how they were feeling each day. They would have a runner, usually a child, sprint the information back to the central village which then connected every day with the district health team to pass on the information.”

Jose spent a total of three weeks in the village. As Ebola cases were found, he helped set up an isolation area and brought in Doctors Without Borders (MSF) to treat patients.

The MSF team did more than establish a treatment center, they also modernized the facilities.

“I’ve never been happier to see a pit latrine and bucket shower in my life,” Jose joked.

But one of the most significant experiences for Jose came months after he left Liberia, when WHO declared the Ebola outbreak in Liberia was over.

“To go from a situation that was so desperate, where entire villages were disappearing, to being free of Ebola was a true testament to how hard the Liberians worked. I hope the infrastructure that’s in place now, combined with more awareness for Ebola, will help them stay at zero.”