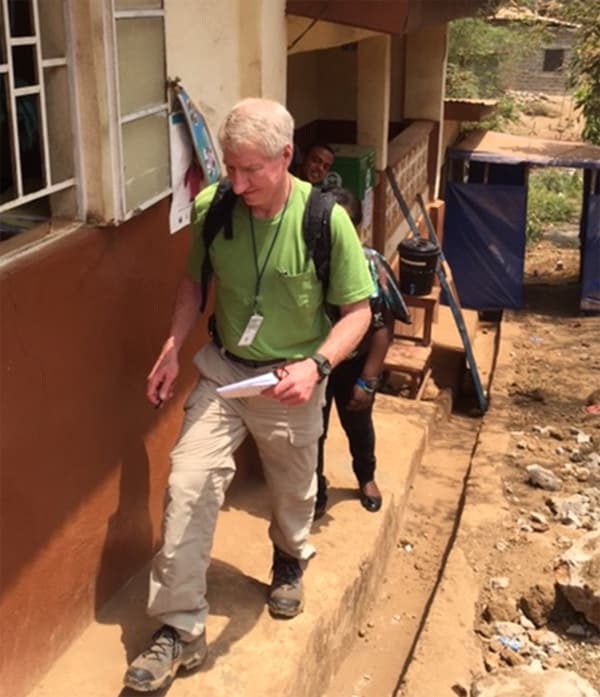 Jeff leaving an assessment at a PHU in Sierra Leone.

“Sierra Leone is a poor country with poor living conditions and even though many have lost loved ones to Ebola, they still manage to smile,” says Jeff. “I’ll never forget their smiles, how they welcomed CDC, and how grateful they were for our efforts – it really got to me.”

While Jeff may not have been prepared to see smiles from the Sierra Leoneans, he was certainly prepared for his deployment after a three-day Ebola Treatment Unit (ETU) training in Anniston, Alabama. Jeff learned everything he needed to know about healthcare infection prevention, but he admitted that the first week in-country presented challenges.

“You have to acclimate yourself with not only to being in a foreign country and your new mission, but also to the way of life,” he explains. “Washing your hands in a diluted chlorine solution and having your temperature taken before you enter any public place is not standard practice in the U.S., but it is in Sierra Leone.”

As an Associate Director for Science for CDC’s National Institute for Occupational Safety and Health (NIOSH), Jeff is much more accustomed to reviewing papers on mine worker health and safety. So taking to the field as a lead on the Infection Prevention and Control (IPC) team was a new experience.

In this role, Jeff visited  more than 100 Peripheral Health Units (PHU) and hospitals in the Western District to assess if medical staff were using health and safety best practices, which ranged from wearing the correct personal protective equipment (PPE) to adhering to screening protocols. After each assessment, Jeff’s team would provide a report to the medical staff that included recommendations to improve that facility’s infection control.

“One of our most frequent recommendations was for adherence to screening procedures,” says Jeff. Screening staff are typically located at a PHU or hospital’s entrance and are responsible for making sure anyone who enters the facility washes their hands, takes their temperature, and answers questions about their symptoms and exposure to someone sick or someone with Ebola to determine if a person is a suspect Ebola case and should be isolated. “Screeners play a vital role in making sure that we achieve zero new cases,” he says.

Although Jeff found it difficult to be away from his two young grandchildren, he is considering deploying to West Africa again. “It was such a rewarding experience to know that we helped the fight against Ebola and were able to make a difference in a short period of time,” says Jeff. “Plus, if I get to see those smiles again – it is totally worth the work.”