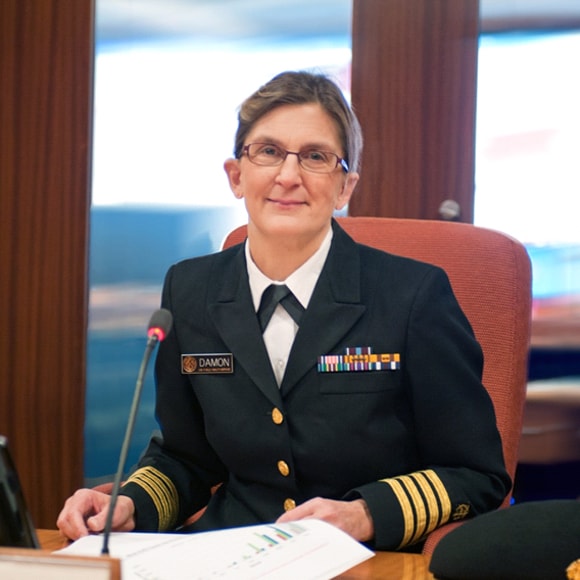 In early July, Inger Damon, M.D., Ph.D., was in Colorado, training at altitude for an extreme 17.1-mile run. But at the end of that month, she found herself running a much more difficult marathon.

Not that her planned entry in September’s Imogene Pass Run — a grueling trek that climbs over 5,300 feet to the 13,114-foot Imogene Pass and descends into Telluride – wouldn’t have been a challenge. But on July 30, she was named Incident Manager to head the Ebola response at CDC’s Emergency Operations Center (EOC). Since then she’s had just four days off.

Inger’s previous experience as head of CDC’s poxvirus and rabies branch, and recent experience as the Director of the Division of High Consequence Pathogens and Pathology steeped her in the science of virus epidemics and responding to situations of uncertain risk, but the size and urgency of the Ebola response meant a greatly expanded leadership role.

“I’ve had to learn how to step back and take a higher level view, to get more skilled at delegating and learning from others,” she said. “My job as incident manager is to gather information on all the many different aspects of the Ebola epidemic, identify gaps and needs, and provide continuity and leadership from this seat.”

A major bottleneck in the Ebola response had been the shortage of health care workers trained to staff Ebola treatment units where people with Ebola infection might be safely isolated and treated. One day, while discussing this frustrating situation with Stuart Nichol, the Chief Scientific Officer for the response, they came up with the idea of a CDC training course to augment MSF Ebola care training efforts. That idea grew into the Preparing Healthcare Workers to Work in Ebola Treatment Units (ETU) in Africa training course, held in Anniston, Alabama , which opened on October 6 and by the end of 2014 graduated 333 volunteers heading for West Africa.

“It grew out of a conversation we  had one weekend about how can we get more American physicians and nurses overseas to help with Ebola care in West Africa and what would it require,” Inger said. “It’s just been incredible to see something come from an idea that’s a conversation one weekend to something where over 200 people who have taken this training course already have gone overseas to do the work.”

An even larger educational undertaking has been the training CDC supports in West Africa.

“We’re teaching people about Ebola, doing community outreach, providing health training to both community and health care workers. We’re teaching the basics of case identification, case management, contact tracing, how to set up surveillance, make sure surveillance works, and using data management systems,” CDC has provided training in the fundamentals of infection control for the health system, and worked with numerous partner organizations. The work CDC has done is comprehensive, and responsive to an outbreak of  unprecedented size.”

“We’re beginning to see the impact of some of these interventions,” she says. “I think it’s most evident now in Liberia; I think it’s been evident for a while in Guinea. And we really are thinking about the next stage – where we’ve plateaued in terms of new cases we can now think about how to begin to eliminate this disease.”