CDC Responds to the 2014 Ebola Outbreak: Heidi and Lindsey 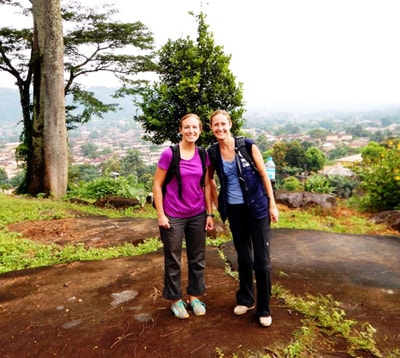 Before the Ebola outbreak in Guinea, infection control in local health clinics was minimal at best. When Ebola took hold, the fragile healthcare system contributed to the rapid spread of the virus and made it difficult to contain the epidemic.

“When thinking about infection control in Guinea it’s helpful to picture the average health facility in that country. It’s usually one to two rooms, it doesn’t have electricity or running water and it’s crowded with sick patients,” explains Heidi, a CDC scientist who recently spent five weeks in Guinea’s hardest hit areas.

Because of the dangers involved in treating sick patients during an Ebola epidemic – the early symptoms of Ebola are similar to those of many other illnesses — Heidi and fellow CDC scientist Lindsey implemented an infection-control training course for Guinean healthcare workers.

Their course was unique in that it focused on healthcare workers in facilities other than Ebola Treatment Units. “Workers in Ebola Treatment Units have already received a lot of training for handling Ebola cases. Healthcare workers in general hospitals and health clinics have not, yet their day-to-day work – delivering babies, vaccinating infants, treating malaria – can easily expose them to people with Ebola infections,” Heidi says. “These workers really need Ebola information and training so they can protect themselves and their patients.” 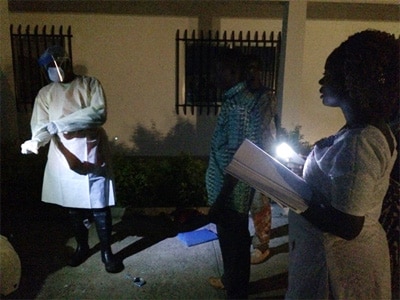 The infection control training in Guinea didn’t stop when the sun went down. The students were so anxious to practice what they learned that they often stayed late into the evening using flashlights and the lights from their cell phones.

Heidi and Lindsey served as technical advisors for the training sponsor, Catholic Relief Services. Students were recruited from nearby health facilities, but on the first day of training people came from as far as 25 miles away!

“On the first day of the course we had 80 students enrolled, but over 100 more showed up eager to be trained and begging to have a spot in the course. Fortunately we were able to add more sessions to cover all healthcare workers in 3 priority regions of Guinea,” Lindsey says.

The classroom did not have electricity, so the course was scheduled to end before sunset. However, on many occasions students wanted to stay and practice longer. “The students were so anxious to learn that they would use flashlights or lights from their cell phones until they had all their questions answered,” Heidi says.

So far, more than 2,000 healthcare workers have been trained in Guinea. Similar programs are taking place in Liberia and Sierra Leone.

“These efforts have the added benefit of being important not just in the context of an Ebola epidemic, but also because they are creating lasting improvements in infection control that should be there for the years to come,” Heidi says.

The latest numbers from CDC show more than 20,000 people in West Africa have been sick with Ebola, and more than 8,000 have died. As Dr. Tom Frieden explains, some areas may be starting to see a decrease in cases, but that does not mean the fight is over. CDC will continue its work in West Africa until we get to zero new cases.