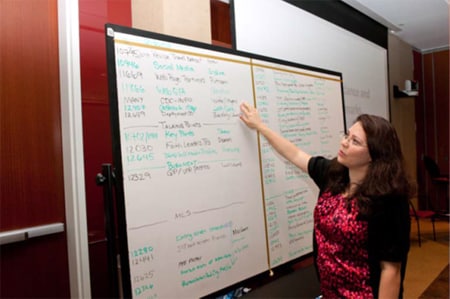 Gabrielle’s career in public health began in grade school. As a type one diabetic she was often teased by classmates who didn’t understand her disease. To help her situation, her parents and school nurse decided she should teach a health education class on type-one diabetes. She says, “After that the teasing stopped, everyone wanted to be my friend because I got to stand at the front of the classroom. That started my career!”

She’s using those same skills now to teach travelers, airport workers and border security agents about the Ebola outbreak in West Africa. Gabrielle is the Associate Director for Communication, Education and Training in the Division of Global Migration and Quarantine. She’s been leading the communication effort for their Global Migration Task Force. This group advises travelers about health threats, writes the messages that display on airport message boards and creates the health signage you see at security checkpoints. “In this circumstance we’re actually recommending people not travel to West Africa unless it’s absolutely necessary,” she says.

The Task Force also teaches customs agents and airport Emergency Medical Services personnel to identify symptoms of Ebola in travelers coming in and out of affected countries.  “We have folks who are deployed and on the ground doing trainings, making sure people are checked for high fevers and asked about their exposures before they even get on a plane. We’re sharing what we know with the hope of really containing the spread as much as possible,” she says.

It’s work she’s done before when the Emergency Operations Center was activated for Middle East Respiratory Syndrome (i.e., MERS) and H1N1 influenza, but she says the high death toll linked to the Ebola outbreak makes this response different. “It feels a lot like early in the H1N1 response when all we were seeing were very severe cases and deaths.  The pace was very fast and we were working around the clock. Ebola is a severe outbreak, it is the largest Ebola epidemic in history. People are dying – we can’t work fast enough and do enough.”

The fast pace and long hours can take a physical and emotional toll. That’s why Gabrielle and her team make personal time a priority. “We brought a gong into the room to ring to remind people when their shift is about to end. It helps us ensure we get the family time we need and the rest.”

But, so far, no one has been disappointed to hear the gong signal the start of their shift. She says, “In an event like this you are forced to bring people together from all areas of expertise who have to try to fix a problem. You see really brilliant people coming up with really brilliant solutions.”