CDC Responds to the 2014 Ebola Outbreak: Fred and Fatima 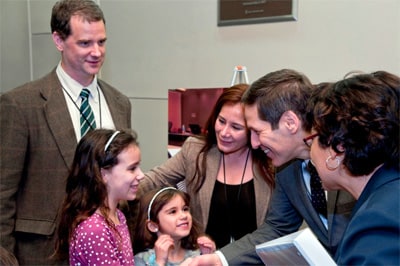 Fred and Fatima with their two daughters as they meet Dr. Tom Frieden.

More than 900 CDC employees have traveled to West Africa as part of the Ebola response, often for weeks at a time. Each employee left behind a spouse, children, or loved ones who had to rearrange their daily lives to make up for their absence.

For husband and wife Fred and Fatima, volunteering for the Ebola response meant their two daughters were without a parent for three out of the last six months.

“I like to say my kids went through three deployments; they are real troopers,” Fred says. Fred was deployed to Sierra Leone in October and November as a member of the health communication team.

“We’re a family of responders,” Fatima says. She spent parts of September and October, and the entire month of January, in Guinea as CDC’s lead epidemiologist. “It was difficult to be away.  I have never loved my blackberry more because when the Internet went down, it still worked and I could connect with the girls.” 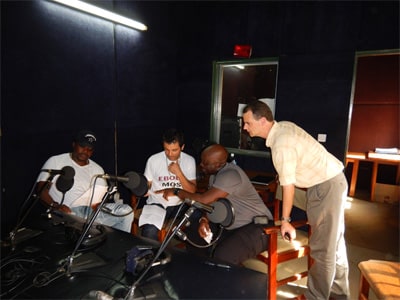 Fred and CDC epidemiologist Desmond work with Sierra Leonean recording stars Jimmy B. and Nasser Ayoub to record PSAs for the "Ebola Big Idea of the Week" campaign.

Their time away was not without merit. During her first deployment, Fatima made sure CDC’s epidemiologists focused on contact tracing, the early identification of symptomatic patients, isolation and treatment, and monitoring of all contacts for 21 days. They also focused on building and identifying chains of transmission for each Ebola patient, to make sure they weren’t missing cases.

“When I came back in January and saw a more sophisticated contact tracing system in place, I knew our efforts early on helped them get to where they are now,” she says.

Fred spent his deployment organizing and coordinating the “Ebola Big Idea of the Week” campaign. Distributed across all media channels each week, the campaign includes a single main message that encourages people to act against Ebola.

“We had eight days to launch this campaign after it was approved,” he says. “It started as a 4-week project to gauge how well it worked. It’s on week 14 now. It’s been a success.”

Fred and Fatima’s children may follow in their footsteps. 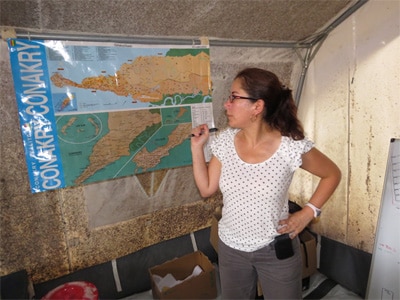 Fatima during her deployment in Guinea, discussing strategies for high risk areas in Conakry, the capital city.

“My oldest daughter says she wants to be in the Epidemic Intelligence Service. She loves to play CDC’s ’Solve the Outbreak’ app,” Fatima says.

“When her mom was deployed they would talk on Skype and she would try to use what she learned in the app to help with the outbreak in Guinea,” Fred laughs.

The girls were the ones who pushed their parents to attend CDC’s Family Appreciation Night for Ebola responders in early February.

“They were so excited to meet Dr. Frieden. They were beaming from ear to ear,” Fred says.

The girls’ grandfather, Fatima’s father, is also a CDC epidemiologist and is currently deployed to Liberia.

“The girls know this is a CDC family, and this is what we are supposed to do. It’s such an honor to work for CDC, and we hope our children are getting a better sense of the gratifying work that is public health,” Fatima says.