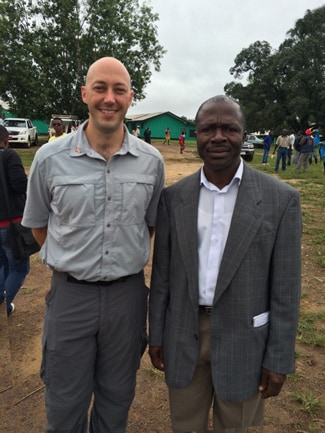 Bucket showers. No internet. Generator-based power, so when the fuel ran out so did the electricity. Those were factors that Erik—one of CDC’s disease detectives recently deployed to Liberia—expected during his thirty-day trip abroad.

But it was the unrelenting grip Ebola had on everyday life that took him by surprise, and tugged at his heart.

“I was not prepared for the impact it had on me emotionally,” he says. “The extent to which the Ebola outbreak was woven into society – I had never seen that before.”

Ebola was everywhere. It was at church, where parishioners heard sermons about communicable diseases. It was on the radio and music television, where performers sang songs about the deadly virus. It was visible outside Ebola treatment units where patients were sometimes turned away because of a lack of beds. Erik says many of his Liberian colleagues had family members or friends who had died or were sick, and at times they would break down and cry. “They’re just trying to do what they can to keep pushing forward and help the response, but it was taking an emotional toll on them,” he says.

Erik and his team were able to help the Liberians establish the infrastructure they so desperately needed to fight the spreading Ebola virus. He worked with local health officers to identify their technical capabilities, and evaluated their ability to respond to and monitor cases. He helped them get ready to transition from written records to tablets and smartphones, a program funded by the CDC Foundation, that should lead to more timely reporting of cases.

It’s a start, but there is much more to do. “We’re not at a point where we’re interrupting the transmission of the Ebola virus in Liberia yet. We have to have all these things in place to get to that point, but we haven’t gotten there yet,” Erik says.

He should know. He spent most of his 10 year career as a U.S. Navy medical officer responding to crisis. He helped victims of earthquakes and floods, and was on the ground in Indonesia after the 2004 tsunami killed hundreds of thousands and left behind a sea of devastation.

That experience taught him there’s much more that needs to happen before West Africa can recover from this outbreak. He says Dr. Frieden’s visit to West Africa, and President Obama’s pledge for additional funding and support has brought the situation much-needed visibility. But Erik feels everyone has the opportunity to help.

“Whether it’s deploying, working in the CDC Emergency Operations Center, donating money to charities that are providing care, or helping out your colleague who has deployed by making a meal for their family or helping with childcare: everyone can respond in some way.”