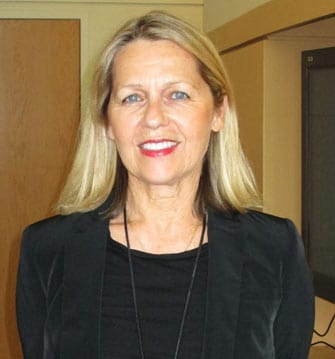 Dominique is trained as a physician and works as a microbiologist at CDC. She deployed to West Africa in July in support of the Ebola outbreak.

Like many of the CDC staff working on the Ebola outbreak, Dominique is no stranger to stepping up during public health emergencies. When she travelled to West Africa in early July, it marked her fourth deployment with CDC, with three prior deployments to Haiti.

Born in Nimes, France, Dominique is a physician who also works as a microbiologist, and this unique combination of skills and background came in handy while working in the predominantly French-speaking country of Guinea.

One of Dominique’s main roles during her deployment was to help support the vital need for improved contact tracingCdc-pdf and data management. “I worked with the World Health Organization and other CDC epidemiologists, gathering and entering data into Epi-Info,” she explains. Epi-Info is a data management and statistical analysis program originally developed by CDC over twenty years ago to share free-of-charge with public health partners. Because it aids data entry, can generate reports, and even makes maps, the program is a crucial tool to help track cases and contacts in the current outbreak. Properly tracking contacts is the key to stopping the outbreak, and so good data management is one of the most important pieces of the current puzzle.

When Dominique arrived in Guinea in early July, the number of confirmed cases appeared to be decreasing at the hospital in her area. “There were only three patients at the ward. But the situation changed before my departure, when a family travelled in from Sierra Leone with a sick person, who then went on to infect several members of the family and also a health worker at the hospital.”

She describes long days and long nights, and notes that she wasn’t the only one pulling those sorts of hours. “There was a young man working with MSF ( Médecins sans Frontières, also known as Doctors Without Borders) who spent many hours at the MSF Treatment Center working with patients, reassuring them, and going to public meetings to share information,” she says, and is quick to acknowledge the extraordinary efforts being made by CDC’s partners in organizations such as MSF.

On a personal note, Dominique said this was the first time she was able to work in the field alongside her husband, Pierre Rollin, MD, a leading expert on viral hemorrhagic fevers at CDC. The two met in high school in France and studied medicine at The Faculty of Medicine of Montpellier, which is the oldest school of medicine in the world.

When asked about lasting impressions, Dominique explains, “One of the best things I remember was meeting with survivors, especially a young woman who was a medical student who had been infected early in April. She received treatment early in the course of the disease and survived. She is now a wonderful advocate for fighting the disease and telling her story.”