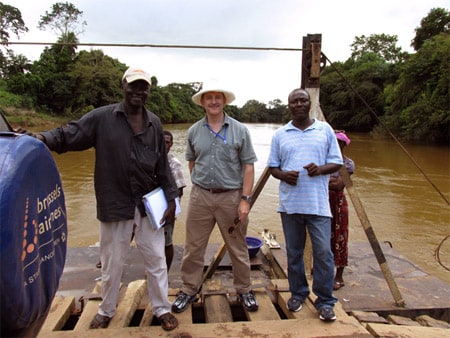 Dan crosses a river in Sierra Leone on a human-powered ferry with colleagues Mohamed Okala Sankoh and James Fornah. One Land Cruiser, one motorcycle, and about a dozen people were pulled across this river by two very-strong men!

Joy can turn quickly to grief in the Tonkolili District of Sierra Leone, where Dan, a CDC epidemiologist, recently spent a month fighting the West African Ebola epidemic.

“An Ebola survivor was cheerfully welcomed back into her community, but when she got to her house she collapsed in tears on the front steps. She had returned from the Ebola Treatment Unit — but the daughter who went with her did not,” he says.

The shadow of Ebola was constantly present during Dan’s time in Sierra Leone. His job involved frequent contact with local health workers as he helped them improve their ability to detect, investigate and follow up on cases. He formed friendships from a distance.

“It’s this very strange juxtaposition where on one hand you are always conscious of not touching people, of not getting too close in a crowd, of constantly sanitizing your hands – and on the other hand you’re living very happy, collegial lives,” he says.

By the time he left, his team of local health workers was prepared to contain clusters of Ebola cases – a job that relies on community cooperation.

“I recently heard from the CDC staffer who replaced me that the team discovered 30 unreported Ebola cases in a single village,” Dan said. “The health official in the village thought Ebola was witchcraft and intentionally kept their outbreak a secret.”

Dan says stories like that, combined with the recent spike in cases in Sierra Leone, confirm that CDC help is needed more than ever.

“We’re learning in this outbreak that Ebola is not always a death sentence. We’re learning how to care for patients so more people can live through it,” he says. “Getting to people early before they are so sick that they can’t be treated will not only improve survival rates but also prevent the virus from spreading.”

Dan is happy to have contributed to Sierra Leone’s battle against Ebola, but he is even happier to be home. It was the longest he had ever been away from his family. For his youngest son, who has Down Syndrome, it was just too much. “It was too long for Daddy to be away. It was very, very hard on him,” he says.

It’s been a warm homecoming. “People who wouldn’t usually do so have gone out of their way to shake my hand and give me a hug,” he says.

But each hand shake and hug are reminders that his West African friends are still living touch-free lives. “African greetings are very physical, so to take that culture and literally impose no touching – it’s been a surreal way to live. Yet it will be a while before touch is welcome again.”