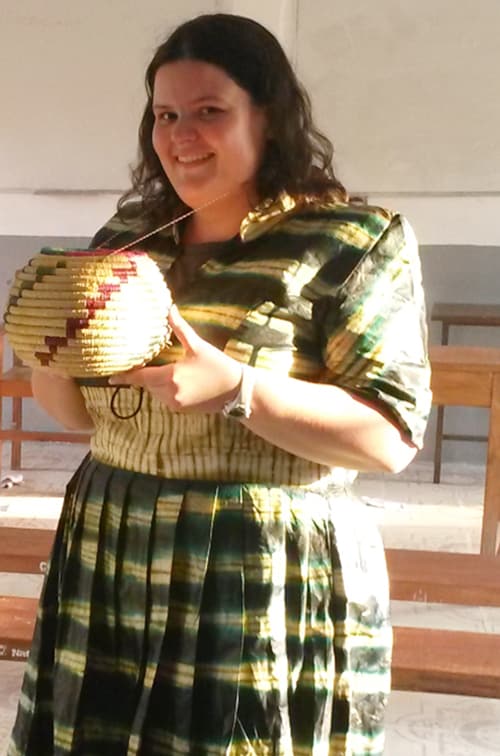 Christina wearing a dress given to her by the Bombali Ministry of Health Surveillance team in Sierra Leone.

For many people, international travel brings to mind vacations that offer rest, relaxation, and beautiful sights. This was not the case for Christina, whose first trip abroad was a deployment to fight Ebola in Sierra Leone.

“Because it was my first time to travel internationally, I didn’t know what to expect—even with all of the pre-deployment training. It was truly an eye opening experience,” Christina says.

As an Epidemic Intelligence Surveillance (EIS) Officer for CDC’s National Institute for Occupational Safety and Health (NIOSH), Christina knows all too well the consequences of workplace hazards. But, to see the poor road conditions and an overall lack of infrastructure was a shock. “The roads were terrible in some areas and there are no stoplights, so it created issues for transporting specimens to the lab for testing,” she says.

While Christina was primarily responsible for managing epidemiologic data and identifying communities to focus case investigation efforts on, her passion for worker safety and health was evident. “I worked with local surveillance officers to ensure they were wearing the right footwear, sprayed their shoes with a diluted chlorine solution, and returned from the field before dark. It’s important to keep our Ebola response workers safe, so they can continue their brave work in stopping Ebola,” Christina says.

Christina also accompanied surveillance officers into the communities to interview possible Ebola patients. It was during this time that she learned a lot about the locals. “It was important for me to go out into the communities because I was able to put a face to the numbers that I was calculating – it made my work meaningful and the locals were so welcoming,” she says.

As the first person to deploy from her division, Christina has become a role model and mentor to others, encouraging them to get involved in the Ebola response. She even held a brown bag lunch session where she answered questions and shared her experiences. “My colleagues were so supportive and had many questions about my experience,” she says.

“Several of my colleagues have deployed both domestically and internationally, to help with the Ebola response. It’s an honor to know that, in some way, I may have helped someone make the decision to fight Ebola by sharing my story.”

Even though Christina has returned from her deployment, she has had little time to rest and relax because she is busy planning her second international trip – her honeymoon. “My fiancé, Gus, and I are getting married in Miami at the end of June and then taking a cruise to Grand Turk and the Bahamas.”

“Working on the response was an incredibly rewarding experience, and even though there is still work to be done, some of what we’re doing can’t be quantified. We’ll never know the number of people who don’t get Ebola because of CDC’s efforts.”