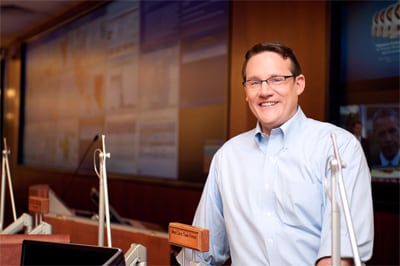 During the height of the Ebola outbreak, Dr. John Brooks used a simple system to manage the flood of phone calls he received as the leader of CDC’s Ebola Response Medical Care Task Force. When a handwritten sticky note with the name “Dr. Frieden” was stuck to his headset, it meant he was on the phone with the Director of the CDC and all other calls would have to wait.

“It was a hectic time. Many of us worked very long days with no breaks on the weekend. The public had been seized with fear of Ebola, and we were doing our best to manage that fear with science-based information.”

As the lead on the Medical Care Task Force, Dr. Brooks was responsible for teaching doctors, nurses, and the general public about how Ebola spreads and how to prevent infection. He and his team members led dozens of calls with hospitals on the science behind Ebola and taught them how to evaluate patients reporting symptoms of the virus. His team helped to develop infographics that easily translated Ebola information into plain language a general audience could understand.

“I learned a powerful lesson during my Ebola work, and that is the power of fear. Fear is a natural emotion; it’s supposed to protect us from injury or infection. When you see that lion you run! But too much fear can be a bad thing. It was our responsibility to understand the science behind Ebola and use that to encourage positive action, not panic,” he says.

Dr. Brooks has been involved with CDC’s outbreak responses for nearly twenty years. He started with the agency as an Epidemic Intelligence Service officer, or disease detective, investigating outbreaks of foodborne illness.

The lessons he learned as a disease detective gave him the tools he needed to help during major public health events like the anthrax attacks after 9/11, SARS, and Hurricane Katrina.

“To understand an epidemic, you often need the 35,000-foot view, looking for trends and patterns,” he says. “But you also need to find out what’s going on at ground level, what’s happening to the people at risk of, and being affected by, the condition you’re trying to prevent.”

Dr. Brooks has taken another break from his usual job in the Division of HIV/AIDS to serve as lead of the Ebola Response Medical Care Task Force, for the second time since the Ebola outbreak began.

“As long as the Ebola outbreak continues in West Africa, there’s a risk for infection in the U.S and in other places around the world. I am dedicated to this response until we get to zero cases,” he says.