We Have to be Prepared 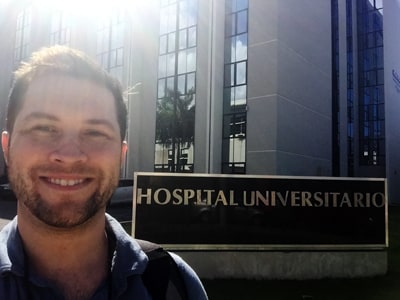 For the past year, Dr. Daniel Pastula has been studying a disease that is anything but typical. It’s rare, often misunderstood, and not well-known by most people. That is, until it became linked to Zika virus.

Pastula, a neurologist, medical epidemiologist, and former Epidemic Intelligence Service (EIS) officer at the University of Colorado School of Medicine has been working with CDC to investigate the link between Zika and Guillain-Barré syndrome (GBS). GBS is a sickness of the nervous system in which a person’s own immune system damages nerves, causing muscle weakness and, sometimes, paralysis. GBS is linked to a variety of infections, and the disease may be triggered by Zika infection in a small number of people.

“GBS is a very serious disease,” Pastula said. “Fortunately, it’s rare, but we have to be prepared for it.”

In February, Pastula deployed from his home in Colorado to Puerto Rico, where he helped the Puerto Rico Department of Health establish a surveillance system for GBS. The goal is to track the number of GBS cases, determine whether the number of cases is increasing and, if so, whether Zika is the cause.

There seems to be a link between Zika and GBS, Pastula said, and scientists are still learning exactly how Zika virus infection might lead to GBS. In Brazil, the Ministry of Health has reported an increased number of people who have been infected with Zika and also have GBS.

Investigating the number of GBS cases involves coordination between local clinicians who report the cases, the Puerto Rico Department of Health and CDC. Pastula assisted the Puerto Rico Department of Health in developing a reporting system as part of surveillance efforts, so hospitals and neurologists can easily send GBS case information to local epidemiologists studying the disease. The process involves confirming each patient has GBS, determining whether the patient may have had Zika, and then following up on the patient’s recovery.

As Zika spread throughout Puerto Rico, it became critical that clinicians were aware of the connection to GBS, and how to diagnose and treat the disease. Pastula helped the Puerto Rico Department of Health create educational tools for clinicians that spell out how to recognize the symptoms and how to manage the disease, which can be severe.

For Pastula, seeing patients struggle with GBS is the most difficult part of the job. Although most GBS patients recover, the immediate effects of the disease can be debilitating and some people may have permanent damage.

Back in Colorado, Pastula continues to not only help CDC in GBS investigations, but also cares for patients hospitalized at the University of Colorado for GBS from a variety of other causes.

As he continues to support the Zika response, Pastula urges people to prevent Zika by protecting themselves from mosquito bites.

Zika “is affecting so many people throughout the world,” he said. “So many people are suffering, and I want to help.”