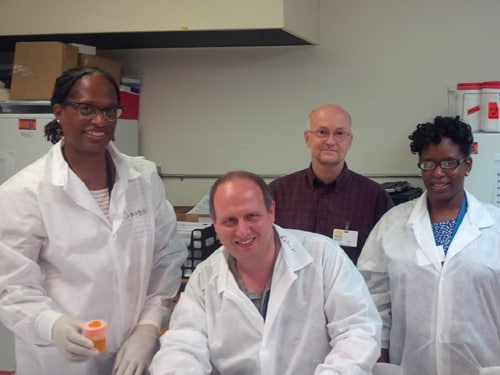 Delinois was working in CDC’s tuberculosis lab when she first joined the Ebola response and subsequently the Zika response, serving on the Medical Investigations Team (MIT) in the Division of Emergency Operations. MIT is responsible for responding to clinical inquiries, employee post-deployment assessments, and the CDC Emergency Response Team (CERT). The CERT is a rapid response team of highly trained senior public health experts who can quickly mobilize anywhere in the United States when requested by state or local health officials. During the Zika response, CERT mobilized teams to support local efforts in Utah, Florida, and Texas. By September 2016, Zika was being spread by mosquitoes in areas of Miami-Dade County, Florida, and Delinois soon went from working with those who deployed to being deployed herself.For three weeks in September 2016, Panayotta Delinois worked in a Florida laboratory, performing a job that is critical for CDC’s response to Zika, yet unfamiliar to many.

Delinois, a trained laboratorian, traveled to areas of Florida where many specimens for testing were coming in to the labs. Delinois stepped in to make sure that standard operating procedures were clearly understood and followed.

“I was able to share my expertise gained from working in a CDC laboratory to support this effort,” Delinois said.

CERT worked to streamline the workflow at the lab by reviewing safety measures, revising protocols, and triaging samples received for testing. As many labs were overwhelmed with specimens, Delinois helped triage incoming specimens based on FL’s testing criteria. She carefully reviewed records for completeness which helped to ensure specimens were sent to the appropriate testing laboratory. Her team then sent the specimens to the appropriate laboratory for testing.

“The work was constant, as more and more specimens from Florida were received for testing,” Delinois described.  “It was also vital that the laboratory workflow was streamlined to get test results to pregnant women as soon as possible.”

CERT worked nonstop to support Florida to ensure success. “If there was a process that I could help streamline, it was always important for me to do so to help make the workflow more efficient,” she said.