Features from the Front Line: NYC 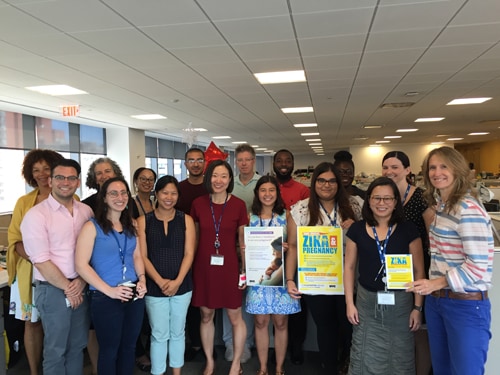 Members of the New York City Department of Health and Mental Hygiene's Zika Response Team with educational materials about Zika, designed by the agency for provider and community outreach.

Making the Case for Zika Testing with NYC Health Providers

New York City’s (NYC’s) Department of Health and Mental Hygiene (DOHMH) has reported nearly a quarter of all cases of pregnant women with Zika virus infection (Zika) in the United States, the largest proportion of any metro area.

Confronted with the challenge of identifying and testing a large number of pregnant women at risk for Zika, NYC’s DOHMH used city and federal funding to help support a team of more than 10 staff to work on surveillance activities for CDC’s US Zika Pregnancy Registry (USZPR). The NYC Zika Pregnancy Registry (ZPR) surveillance team implemented comprehensive outreach to healthcare providers throughout the city and improved surveillance capacity to ensure that pregnant women at risk for Zika received necessary evaluation and testing.

Engaging in Outreach to Health Providers

To make the case for Zika testing, the team got the word out to the provider community through citywide conference calls, health alert emails, grand rounds, and other in-person presentations for facilities and hospital networks. They continued these efforts even as news coverage for Zika began to wane.

The team provided close support to both OB/GYN and pediatric healthcare providers by communicating one-on-one by phone and email and helping them understand Zika test results and current recommendations for their patients. The team also communicated with OB/GYNs near the anticipated delivery date of pregnant patients who had tested positive for Zika, reminding the physicians to inform the health department when the woman delivered, so their infants could receive the recommended evaluations.

The team developed resources and tools that were posted on the NYC DOHMH’s website, including the following:

The team also maintained a healthcare provider website and updated materials and messaging to reflect the latest science, guidance, and recommendations.

Given the size of the city’s population and the large volume of travelers to areas affected by Zika, the NYC ZPR surveillance team prepared surveillance tools at the start of the 2016 Zika outbreak. The team created a case report form specifically for NYC and developed a standardized way of entering case information into their existing surveillance database.

The team conducts enhanced surveillance when Zika is confirmed in pregnant women, in collaboration with CDC’s US Zika Pregnancy Registry. Part of this effort involves collecting information at designated times during the pregnancy, at birth, and then at 2, 6, and 12 months of age for infants. With each case reported by the NYC DOHMH to the Registry, the work involved includes:

Going Forward – More Robust Maternal Follow Up during and after Births

The NYC ZPR surveillance team learned that better ways are needed to communicate a woman’s Zika status to the various care providers she sees throughout her pregnancy and delivery, as well as to her infant’s provider(s). The team is developing a wallet card that will go with the mother and her baby so any obstetric or pediatric provider will have a record of the mom’s Zika status.

In addition, the team found challenges to follow-up with infants of mothers who tested positive for Zika, for example, the family may have moved out of NYC or had changed providers. To address this challenge, the team is tapping into the citywide immunization registry and regional health information networks to identify where an infant is seeking care, so they can track the health of these infants over time.