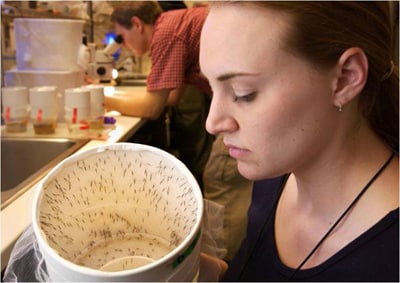 In this CDC photo, a laboratory technician looks into a sealed container of mosquitoes scheduled to undergo testing. In New Orleans, local experts collect mosquitoes for virus testing as part of a citywide mosquito surveillance program.

On March 10, 2016, before there was a confirmed case of Zika virus disease or even suspicion of a case in the city, the mayor of New Orleans presented the city’s Zika response plan to state and local leaders. The people of New Orleans did not wait for Zika to come to them before taking action. The New Orleans Department of Health, the City of New Orleans Mosquito and Termite Control Board and other partners had already planned mosquito control and public education activities to combat the mosquito-borne virus.

US cities need to follow New Orleans’ lead and proactively prepare for local transmission of the virus from the bite of an infected mosquito.

When the city presented its Zika response plan to state and local leaders, the virus already was spreading in parts of South America and some US territories. The virus is causing serious birth defects in babies whose mothers were infected with Zika virus during their pregnancies. As a tourist destination and a port city with large populations of the Aedes aegypti and Aedes albopictus mosquitoes that can carry Zika virus, New Orleans health and city officials realized their city was at high risk for local transmission from the bite of an infected mosquito. New Orleans has a long history of dealing with mosquitoes, and city officials understood that the best way to protect people living in and visiting their city was to be as prepared as possible.

Their strategy, called the New Orleans Comprehensive Zika Virus Plan, not only spells out the city’s plan to control mosquitoes, but also brings together clinicians, mosquito control professionals, environmental specialists, politicians, and others to ensure a qualified response team is ready. The plan is separated into three phases: no reported cases, travel-related cases, and locally-acquired cases.

Specifically, city and health officials made sure New Orleans’ healthcare facilities have guidance on screening for Zika and recognizing the symptoms, as well as knowledge of areas where Zika outbreaks are occurring. The city monitors its government information phone line for any Zika-related calls and has begun transferring those calls to the health department, where staff members are trained to answer questions about Zika. City and health officials host seminars for local pest control and environmental health professionals, offering detailed information on mosquito control.

In February 2016, even before the Zika plan was formally launched, officials initiated a citywide mosquito surveillance program that collects mosquitoes for virus testing. The goal is to learn more about the biology of the mosquitoes that can carry Zika virus, identify the areas at greatest risk for those mosquitoes, and strengthen the city’s mosquito control methods. As the city rolled out its Zika plan, these surveillance activities — and routine mosquito control — continue.

In April, when the first traveler returned to New Orleans and had Zika, the city was quick to implement Phase 2 of the plan. The city launched a door-to-door campaign focusing on protection against mosquito bites. Code enforcement and other city departments work to find and remove any debris that could hold water and attract mosquitoes. The city continues to update its website with Zika information, hand out Zika guidance to several organizations, and monitor the city phone line for Zika calls.

If local transmission from the bite of an infected mosquito is confirmed in New Orleans, the city is ready to act. In Phase 3, teams are prepared to aggressively control mosquitoes in areas that have active Zika transmission. The plan calls for aerial and ground mosquito treatments, property inspections, and educational campaigns. Trained outreach teams will visit neighborhoods where cases are reported, answer questions, and hand out information on the basics of Zika, how to prevent it, and how to control mosquitoes. The teams will continue to inspect properties and remove standing water to get rid of areas where mosquitoes can lay eggs.

The key to New Orleans’ success is the city’s proactive planning and partnerships. It will take teamwork to combat Zika, and New Orleans has set a good example by bringing together city officials, healthcare workers, mosquito control agencies, and many others. The city and its citizens were prepared when the first travel-related Zika case was confirmed, and they’ll be ready if the virus is spread by mosquitoes in New Orleans.