I Wouldn’t Have Missed It 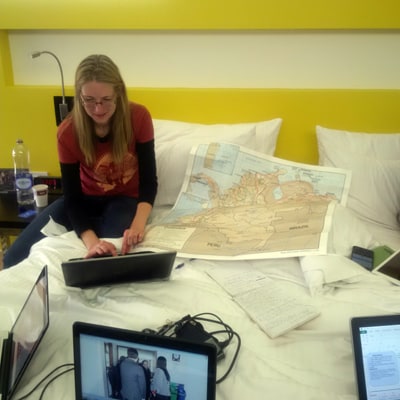 Dr. Christina Nelson works on Zika surveillance from her hotel room in Colombia. Nelson is among a large group of CDC responders who have worked around the clock to combat Zika virus disease

It was Super Bowl Sunday, and the Denver Broncos were neck-and-neck with the Carolina Panthers. Everyone in Colorado was glued to their TV screens – except Dr. Christina Nelson. She had just found out that she was deploying to Colombia for CDC’s Zika response, and she needed to leave the next morning.

It was less than ideal timing for a Broncos fan from Colorado — not to mention a mother of two, who scrambled to pack and organize the care of her sons on very short notice.

Still, Nelson was determined to make it work. Nelson is a CDC epidemiologist, who searches for the cause of disease, identifies people who are at risk and determines how to stop the spread and prevent it from happening again.  After studying encephalitis in Peru before coming to CDC, Nelson has a special connection to the region, and she understands the heartbreaking effects Zika virus infection can have on pregnant women, their babies, and the entire community.

“I wouldn’t have missed it. I tried as hard as I could to make it happen,” Nelson said about deploying. “This has been such a looming and horrible outbreak for everyone involved.”

Nelson is among a large group of CDC responders who have worked around the clock to combat Zika, which is primarily spread by bites from infected mosquitoes. Although the illness is usually mild, Zika virus infection during pregnancy can cause a serious birth defect called microcephaly, as well as other severe fetal brain defects. With local transmission reported in nearly 50 countries and US territories as of June 2016, a substantial response by the public health community is critical.

Nelson has deployed to Colombia twice – once in February and once in March 2016 – and she deployed to El Salvador in May 2016. On her initial deployment to Colombia, the main objective was to collaborate with the Colombian National Institute of Health (Instituto Nacional de Salud) and offer support for investigating Zika, particularly in pregnant women.

“It was really a fantastic collaboration from the get-go,” Nelson said. “It’s been such a privilege to work with so many talented, driven people – both at CDC and in the countries with which we’ve been collaborating.”

The CDC team assisted Colombia with surveillance for Zika, building on the monitoring system the country already had in place for certain diseases. They helped develop a plan to closely monitor pregnant women, who already were being identified through Colombia’s existing system.

The process of monitoring pregnant women has been anything but easy. CDC and National Health Institute teams have been combing through countless records, looking at patient charts to find pregnant women who were possibly infected with Zika, testing the patients, and following up after they give birth. They typically work 15 to 18 hours a day, often holding meetings in hotel rooms or any space that is available.

In El Salvador, Nelson also worked with a team to help implement a Zika plan for pregnant women enrolled in an influenza study already underway. The study enrolls women at the beginning of their pregnancies and follows them closely to determine the effects of influenza on their pregnancies. The team knew this was an opportunity to follow pregnant women who are exposed to Zika, and help prevent the devastating birth defects that can result from Zika.

Back at the CDC office in Fort Collins, Colorado, Nelson continues to support the Zika response. In the Division of Vector-Borne Diseases, Nelson normally focuses on diseases such as plague and Lyme disease. But for now, she is proud to be part of the effort to learn more about Zika and stop the outbreak.