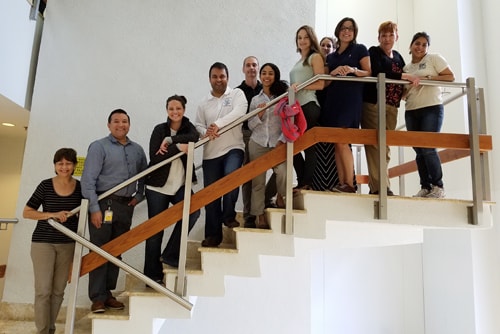 Ibad Khan (fourth from the left) spent much of 2016 leading the Puerto Rico Joint Information Center (JIC). In addition to his deployment in the fall, Khan worked in Puerto Rico for a month in May 2016.

Over the past few years, Khan has constantly been involved in emergency responses. He has worked in CDC’s Emergency Operations Center (EOC) since August 2012 and has completed multiple tasks for different emergencies, from fungal meningitis to Hurricane Sandy to Ebola. In 2016, Khan supported the Zika response, and much of that time was spent leading the Puerto Rico Joint Information Center (JIC). In addition to his deployment in the fall, Khan worked in Puerto Rico for a month in May 2016. His work in Puerto Rico has been among the most challenging deployments for Khan.

Communication is a critical part of any response, and that is particularly true in Puerto Rico.

“When I landed, I realized there were a lot of gaps in message retention and people understanding what was important,” he said.

When he initially deployed to Puerto Rico, one of the biggest challenges was helping the public to understand the serious risks associated with Zika. The people of Puerto Rico are, however, very familiar with dengue and chikungunya viruses, which are similar to Zika and have spread throughout the territory in the past.

Unlike dengue and chikungunya, Zika often doesn’t cause symptoms, and any illness caused by Zika is usually mild and lasts up to a week. When Khan arrived in Puerto Rico, he found that, after experiencing other mosquito-borne diseases, many people did not take Zika seriously and believed it was better to have a Zika outbreak than a dengue or chikungunya epidemic.

“That misunderstanding is a gap that effective communication can fix,” Khan said.

Khan’s team immediately began working on communication strategies that would help people understand why Zika is so risky for pregnant women and why it’s important for all people to protect themselves and their community.

In addition to managing the overall communication efforts, Khan acted as a media officer and he was involved in his team’s social media work, which was unprecedented for the response in Puerto Rico. For the first time, Puerto Rico’s Zika Incident Manager and partners, including Women, Infants, and Children (WIC), participated in a live chat on Facebook. The platform is very popular in Puerto Rico and the Puerto Rico JIC used it to directly answer the public’s questions.

Facebook was just one of the many strategies Khan’s team used to get the message out in Puerto Rico.

By the end of 2016, Khan had deployed to Puerto Rico for a second time. At that time, the landscape of the Puerto Rico EOC was different, both literally and figuratively. The response was housed in a different building and partnered with different organizations. The JIC included more responders that filled different roles and, soon after Khan deployed, Puerto Rico reported its first case of Zika-related microcephaly.

Still, Khan was ready for the challenge. After all, he has spent many years deploying for emergency responses, and will continue to support public health emergencies even after he returns from Puerto Rico.