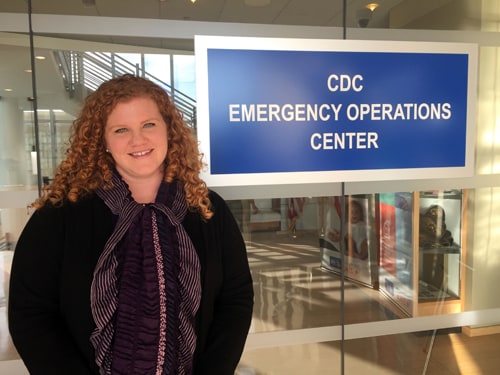 When Amy Gargis joined the Zika response in August 2016, it was the first time she had taken part in an emergency response.

‘We are continually learning more’

It was the first time Amy Gargis had taken part in an emergency response, and, as a leader of the Zika laboratory team in the middle of making significant updates to CDC’s Zika testing guidance, the pressure was on.

“Everything was new to me because it was my very first response,” Gargis said.

When Gargis joined the response in August 2016, a variety of new Zika tests were being used in laboratories across the globe, and her team was in the midst of revising the current guidance to include all available tests. The updates were substantial and required close collaboration with other Emergency Operations Center (EOC) task forces and the U.S. Food and Drug Administration (FDA), and many hours of work.

“We are learning more about Zika virus every day,” Gargis said. “There is a continuous need to refine and improve Zika diagnostic tests and to include up-to-date information in our laboratory guidance and testing methods.”

For example, after CDC’s Zika Trioplex test received Emergency Use Authorization (EUA) in March 2016, CDC worked with FDA to expand acceptable testing sample amounts and types. Diagnostic testing for Zika virus is complicated because multiple tests and sample types are often needed to make a diagnosis.  Specifically, there are three testing methods based on the presence of symptoms, whether the person is pregnant, and the time between symptom onset or exposure to Zika and when the specimen was collected for testing.  Therefore, recommendations for testing can be complicated and have changed over the response.

“It’s a really complex algorithm, but it’s necessary at this time,” Gargis said.

Gargis and her team spent months revamping the laboratory guidance to make it consistent with the new information scientists were gathering. The new guidance addressed updates to the CDC’s Trioplex test that added whole blood to the list of specimens that can be tested, detailed the removal of routine confirmatory plaque reduction neutralization testing (PRNT) in Puerto Rico, and incorporated language to be inclusive of all available EUA tests. The new guidance was in depth, and required an extensive communication with clinicians, laboratory scientists, and many other stakeholders about the changes and what they meant.

“That was one of the biggest accomplishments during my time in the EOC, the release of that document,” she said. 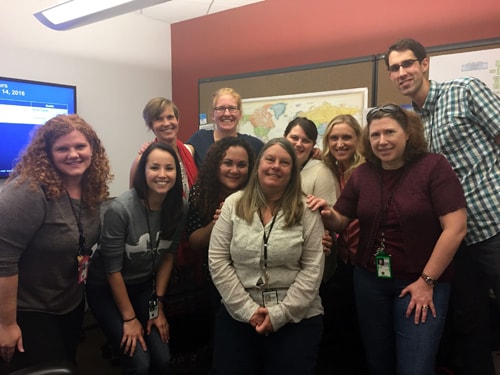 As a leader of the Zika laboratory team, Amy Gargis played a major role in making significant updates to CDC's Zika testing guidance.

When the guidance was updated, the Zika tests had been in use for less than a year, and there was already a huge demand for Zika diagnostics both domestically and internationally.

When Gargis first joined the response, she worked with the Trioplex production and distribution teams that made sure that testing kits were available for the laboratories that needed them. These teams would work with the Laboratory Response Network to support testing in domestic laboratories, process international requests for Trioplex kits, monitor CDC’s Trioplex kit and verification panel inventories, and facilitate production of new reagents when supplies ran low.

“It was a steady stream of requests for testing kits,” she said. In Puerto Rico, where tens of thousands of cases have been confirmed, Gargis’ team constantly shipped kits. There was such a large demand internationally that her team created a full-time position just for Trioplex requests.

Laboratories across CDC – from Puerto Rico, to Colorado, to Atlanta – worked around the clock to test thousands of specimens for Zika virus. In Atlanta alone, three laboratories were activated to provide surge capacity for Zika testing, and laboratory staff have devoted days, evenings, and weekends to testing specimens. As of December 2016, these Atlanta laboratories have received more than 4,500 specimens. Gargis was impressed by the dedication of the scientists she worked alongside during her first emergency response.

“They work constantly,” Gargis said about the laboratory teams. “And they are doing all of their regular work in addition to Zika.”