Invasive methicillin-resistant Staphylococcus aureus (MRSA) disease: isolation of MRSA from a normally sterile site in a resident of the surveillance area in 2013. Cases of disease are classified into one of three epidemiologic classifications. A case is classified as hospital-onset (HO) if the MRSA culture was obtained on or after the fourth calendar day of hospitalization, where admission is hospital day 1; as healthcare-associated community-onset (HACO) if the culture was obtained in an outpatient setting or before the fourth calendar day of hospitalization and had one or more of the following: 1) a history of hospitalization, surgery, dialysis, or residence in a long term care facility in the previous year, or 2) the presence of a central vascular catheter (CVC) within 2 days prior to MRSA culture; and as community-associated (CA) if none of the previously mentioned criteria are met.

ABCs personnel routinely contacted all microbiology laboratories serving healthcare facilities in their area to identify cases. Standardized case report forms that include information on demographic characteristics, clinical syndrome, and outcome of illness were completed for each identified case. Convenience samples of isolates were collected and sent to CDC for routine testing, including antimicrobial susceptibility testing, toxin testing, SCCmec typing, and spa typing. Pulsed field gel electrophoresis (PFGE) of all isolates was discontinued in 2008; up until 2012, PFGE was inferred based on a validated algorithm. Starting in 2012, spa typing was added to the routine laboratory testing. Pulsed field type is currently inferred based on spa type, inferred MLST clonal complex and molecular characteristics of the isolates. In 2014, isolates were only collected in three sites (Georgia, Minnesota, and Tennessee). Regular laboratory audits were performed to ensure completeness of case detection.

In 2014, some sites collected limited data from most hospital-onset cases, with full case report form data collected only for a random sample of 10– 20% of hospital-onset cases. Data not collected because of sampling were estimated based on the distribution of collected data to calculate incidence. Detailed case data below only reflect data from full case report forms unless otherwise specified. Rates of invasive MRSA disease among all patients were calculated using population estimates for 2014. Cases with unknown race were assigned race based on distribution of known age, race, and gender by EIP site. Confidence intervals for nationally estimated incidence rates of disease and mortality were calculated based on the gamma distribution (Stat Med, 1997 16:791-801).

aSome case patients had more than one syndrome.
bCatheter site infection or AV fistula infection only are included in BSI with other syndrome.
cLower Respiratory Infection is defined as: a patient with pneumonia documented in their discharge summary who has a positive MRSA non-sterile respiratory specimen with accompanying chest radiology results documenting any of the following: bronchopneumonia/pneumonia, air space density/opacity, new or changed infiltrates.
dCombines deep tissue/organ infection and infection of a surgical wound, post operatively.
eCategory includes skin abscess, necrotizing fasciitis, gangrene.
fCategory includes non-traumatic and other chronic wound infections. 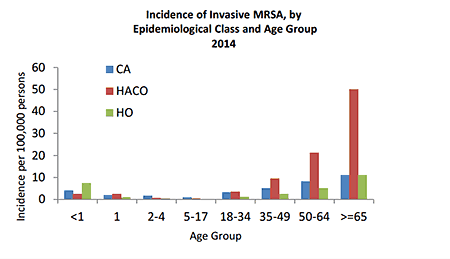 aNational Estimates and Incidence (no. per 100,000 population per year) are adjusted for age, race, gender and receipt of chronic dialysis using 2014 US Census Data.
bNational Estimates and Incidence (no. per 100,000 dialysis patients per year) for dialysis patients are adjusted for age, race and gender using 2013 USRDS point prevalence data.
cStarting in 2011, confidence intervals on national estimates were calculated based on 72 age/race/gender/dialysis specific strata and summarized for an overall national estimate, accounting for variance across all strata producing a more conservative estimate (with wider confidence intervals) compared to estimates prior to 2011.
dNon-dialysis and dialysis estimated number and incidence based on data from a sample of HO cases.
e47 cases could not be classified into an epidemiological category or category is unknown and therefore are counted in the overall estimate only.

aNational Estimates and Mortality Rate (no. per 100,000 population per year) are adjusted for age, race, gender and receipt of chronic dialysis using 2014 US Census Data
bHO estimated number and rate based on mortality data from a sample of HO cases.
c47 cases could not be classified into an epidemiological category or category is unknown and therefore are counted in the overall estimate only.

aDisease Rate (no. per 100,000 population per year) and National Estimates are adjusted for age, race, gender and receipt of chronic dialysis using 2014 US Census Data