Invasive methicillin-resistant Staphylococcus aureus (MRSA) disease: isolation of MRSA from a normally sterile site in a resident of the surveillance area in 2009. Cases of disease are classified into one of three epidemiologic classifications. A case is classified as hospital-onset (HO) if the MRSA culture was obtained on or after the fourth calendar day of hospitalization, where admission is hospital day 1; as healthcare-associated community-onset (HACO) if the culture was obtained in an outpatient setting or before the fourth calendar day of hospitalization and had one of more of the following: 1) a history of hospitalization, surgery, dialysis, or residence in a long term care facility in the previous year, or 2) the presence of a central vascular catheter within 2 days prior to MRSA culture; and as community-associated (CA) if none of the previously mentioned criteria are met.

ABCs personnel routinely contacted all microbiology laboratories serving acute care hospitals in their area to identify cases. Standardized case report forms that include information on demographic characteristics, clinical syndrome, and outcome of illness were completed for each identified case. Convenience samples of isolates were collected and sent to CDC for routine testing, including: antimicrobial susceptibility testing, toxin testing and SCCmec typing. Pulsed field gel electrophoresis (PFGE) of all isolates was discontinued in 2008; an inferred PFGE algorithm was developed based on microbiologic and molecular characteristics of isolates. The algorithm has been validated for use with isolates collected though this surveillance only (). Regular laboratory audits were performed to ensure completeness of case detection.

Rates of invasive MRSA disease among all patients were calculated using population estimates for 2009. Cases with unknown race were assigned race based on distribution of known race and gender by EIP site. Confidence intervals for nationally estimated incidence rates of disease and mortality were calculated based on the gamma distribution (Stat Med, 1997 16:791-801). Rates of invasive MRSA disease among patients who are undergoing chronic dialysis treatment were calculated using the December 31, 2008 point prevalent counts of patients on dialysis from the United States Renal Data System (USRDS)external icon. 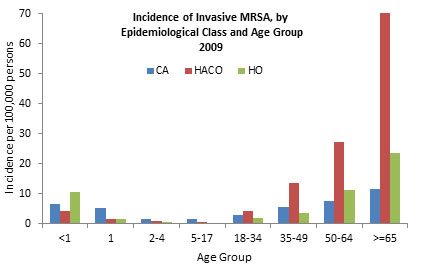 aNational Estimates and Mortality Rate (no. per 100,000 population per year) are adjusted for age, race, gender and receipt of dialysis treatment in the using 2009 US Census Data.
b10 cases could not be classified into an epidemiological category or category is unknown and therefore are counted in the overall estimate only.

aNational Estimates and Incidence (no. per 100,000 population per year) are adjusted for age, race, gender, and receipt of dialysis treatment using 2009 US Census Data.
bNational Estimates and Incidence (no. per 100,000 dialysis patients per year) for dialysis patients are adjusted for age, race and gender using 2008 USRDS point prevalence data.
c115 cases could not be classified into an epidemiological category or category is unknown and therefore are counted in the overall estimate only.

aDisease Rate (no. per 100,000 population per year) and National Estimates are adjusted for age, race, gender and receipt of chronic dialysis using 2009 US Census Data

Surveillance data from 2009 represent the fifth full year of performing population-based surveillance for invasive MRSA infections through the Emerging Infections Program/Active Bacterial Core Surveillance Activity. Several changes in operations include addition of new variables to capture details on dialysis and access type and presentation of target measures to evaluate the reduction of healthcare-associated invasive MRSA infections.

Tables/figures have been added to (1) summarize details regarding type of dialysis and the type of access used for hemodialysis, indicating the majority of cases on chronic dialysis treatment were using central venous catheter for hemodialysis at the time of invasive MRSA culture; and (2) report metrics to measure progress in prevention of healthcare-associated invasive MRSA infections in the United States as part of Healthy People 2020 and the Department of Health and Human Services Action Plan to Prevent Healthcare-Associated Infectionsexternal icon. Overall, compared to the baseline incidence (2007-2008 calendar years) identified in the HHS Action Plan, there was a decrease of 12.3%: a decrease on course to reach the target of a 50% reduction in 2013.

Because incidence of invasive MRSA infection is higher among dialysis patients compared to the general population,2 and increasing awareness and importance is being placed on preventing bloodstream infections among this population in the United States, we are displaying national estimates overall, and separately for dialysis and non-dialysis patients. Also, adjustment for dialysis was refined to account for receipt of chronic dialysis only whereas previous reports adjusted for receipt of chronic and acute dialysis in the past year. Receipt of acute dialysis accounts for ˜7% of all cases with a history of dialysis in the prior year.