There's too much in many common foods.

About 90% of Americans eat more sodium than is recommended for a healthy diet. Too much sodium increases a person’s risk for high blood pressure. High blood pressure often leads to heart disease and stroke. More than 800,000 people die each year from heart disease, stroke and other vascular diseases, costing the nation $273 billion health care dollars in 2010. Most of the sodium we eat comes from processed foods and foods prepared in restaurants. Sodium is already part of processed foods and cannot be removed. However, manufacturers and restaurants can produce foods with less sodium. In addition, you can select lower sodium foods when possible and you can cook more foods yourself, to better control how much sodium you eat.

* The words salt and sodium are sometimes used interchangeably because most of the sodium we eat is in the form of salt (sodium chloride). Some salts don’t contain sodium.

About 90% of Americans aged 2 years or older eat too much sodium.*

Reducing the sodium Americans eat by 1,200 mg per day on average added up to $20 billion a year in medical costs.

Top Sources of Sodium in the Diet

Not all foods are created equal

Understanding sodium in foods can be confusing

People who should limit their sodium to 1,500 mg a day are:

Eating less sodium is a challenge

Sodium levels of the same food can vary widely, so choose wisely.

This chart shows a range of sodium amounts in different types of food. Serving sizes may vary for some foods, e.g., bread slices which may be lower in sodium because of thinner slices. 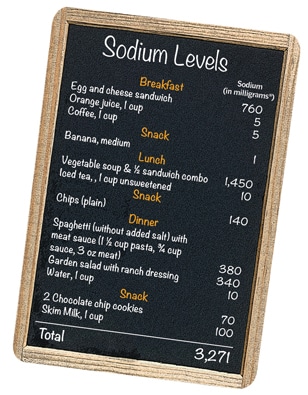 Sodium adds up quickly in our daily diet

Above is a sample diet of 3 meals and 3 small snacks with a total sodium content of more than 3,200 mg.

Note: Values greater than 10 mg of sodium were rounded to the nearest 10 mg.

See the DASH eating plan PDF – 978KB] and other plans at www.choosemyplate.gov.

Places that produce, sell, or serve food can

State and local health departments can